Port of Vancouver USA opens ‘the Trench’; Subaru to benefit 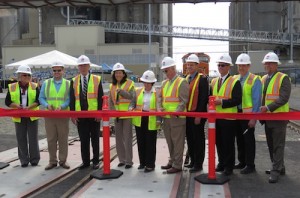 The US port of Vancouver in Washington State has officially opened a $30m rail project designed to improve the flow of goods by train to and from regional locations along the West Coast and between Portland, Oregon, and Chicago, Illinois.

Known as ‘the Trench’, the development, which began in 2012, aims to avoid conflicts between trains entering the port and will triple rail capacity there, according to the Port of Vancouver USA.

The project is part of the wider $275m West Vancouver Freight Access project, which has been set up to reduce regional rail congestion by up to 40% and is due for completion in 2017. It includes funding from the Port of Vancouver USA, TIGER (Transportation Investment Generating Economic Recovery) grants, BNSF, port tenants, Washington State Department of Transportation (WSDOT) and other federal and state programmes. The Trench part of the plan was completed $8m under budget and ahead of schedule, according to a statement from the port.

Subaru of America is among the companies set to benefit from the investment as it looks to continue the growth of its business through the port.

“The West Vancouver Freight Access Project will provide much needed rail infrastructure and capacity to the many shippers that move cargo through the Port of Vancouver,” a spokesperson for the carmaker told Automotive Logistics. “When complete, we believe that the existing levels of rail service will improve and provide Subaru the necessary transportation resources to continue to grow our business.”

Last year Subaru moved almost 82,000 vehicles through Vancouver, which was an 18% increase over 2013. Approximately 60% of Subarus processed there by Auto Warehousing Company (AWC) are loaded onto rail cars provided and serviced by BNSF Railway.

“Within the port of Vancouver there are multiple projects, including multiple loop, stage, and switching tracks to serve all its customers,” confirmed a spokesperson for the rail provider. “BNSF customers utilizing the port will benefit from the increased capacity created by this project, which will lead to better service reliability overall.”

The carmaker has recently extended its lease at Vancouver until 2030 with two additional five-year options that could extend its tenancy there for a further ten years. Its lease was due to have expired on August 31, 2020.