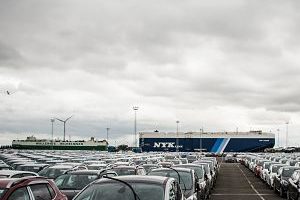 The Port of Zeebrugge has announced plans to expand automotive capacity by 40% in response to strong demand.

Joachim Coens, chief executive of the Belgian port, said the need for additional capacity became evident when 58 hectares of new ground was recently made available.

“Demand for expansion from our current operators was [such] that we needed twice the surface to answer their needs,” he said.

In total 156 hectares will be made available in future, adding to the existing 390 hectares currently in use for car logistics in the inner port.

Initially, 28 hectares in the southwestern corner of the Southern Canal Dock will be made ready for use. A 400 metre long quay wall for this area has been under construction since October last year.

The additional 58 hectares on the left bank of the Southern Canal Dock will be accompanied by construction of a new 1,070 metre quay wall. Another 70 hectares at the Boudewijn Canal and 1,130 metre quay wall will be built to allow the mooring of sea vessels.

This year, the port expects to exceed last year’s record volume of vehicles by almost 20%, with 2.8m vehicles.