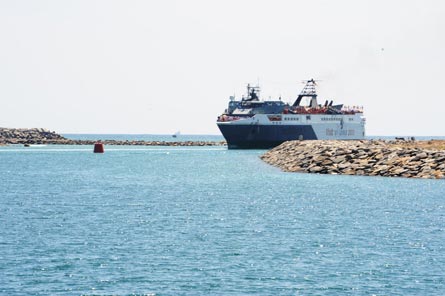 The Sri Lankan port of Magam Ruhunupura Mahinda Rajapaksa (MRMRP) in Hambantota has celebrated the arrival of its one hundredth vessel, a year since it started handling vehicle ro-ro traffic.

Since early June 2012 the port has handled more than 35,000 vehicle units, including almost 15,000 transshipments and 21,000 imports. Last week a Mitsui OSK Line operated ship, the MV Istra Ace, made its maiden call at the port. The vessel has capacity for 4,900 vehicle units.

The port was recently declared a free zone by the government, which has raised hopes for the economic course of the country as a whole over the coming years. Already, it has received an estimated $700m in foreign direct investment from commercial ventures.

Master of the MV Istra Ace, Captain Bochkaryov Sergiy said the position of the port and the services rendered at Hambantota were of the highest quality.

He went on to say that the ongoing developments around the port, which include free zones providing tax havens and bunkering facilities, were certain to realise the long-held hopes of vessel operators sailing in the Indian Ocean for better services. Developments were also most likely to be welcomed by those involved in the field of supply chain management.

Sergiy claimed that, despite its relative youth, MRMRP was one of the best-performing ports in the region and that it was expanding to become a leading international maritime platform.

The Sri Lanka Ports Authority (SLPA) praised the management and efficiency of the port, and stated that adherence to correct managerial practices had led to MRMRP being considered one of the more reliable ports in the region.