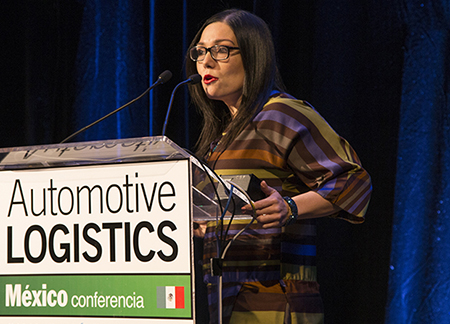 Carmakers and logistics providers have expressed frustration over the slow pace of expansion at the congested Mexican port of Veracruz.

The port is working to install new infrastructure to support growing automotive volumes, which reached 1.03m units last year (up 13.5% on 2016).

The project includes a completely new landside and berth development to the north of its existing facilities. Phase one of the first stage of Zona de Actividades Logísticas (ZAL) is due for completion in 2019. A vehicle terminal at the new location is planned for the second stage, which will be completed by 2024, although carmakers are already using the land, which has been reclaimed from the sea, for storage.

The port authority is also relocating space in the existing port for vehicle handling and building new rail links that will allow rail providers Ferromex and KCS de Mexico to compete on a level basis for terminal-side access to the port (KCS currently has to pay Ferromex for rights of access on the one existing line). The port has indicated that 19.5km of double track will be open by the first quarter of 2019.

Next month, meanwhile, private operator CSI Group will begin work on a six-storey vehicle storage and processing facility near Pier 4 that will have capacity for 10,000 vehicles on a five-hectare site. The facility will provide a range of value-added services including protection, customisation and pre-delivery inspection, as well as parts storage.

Jonathan Flores Cortes, GM's finished vehicle logistics manager for Mexico, questioned whether the government and the port authority were working hard enough for a more efficient service. With road transport now accounting for 76% of vehicle moves in and out of the port (a 10% rise), this had become more expensive, he said. While the port’s long-term plans were welcome, there were questions over what the port authority was doing to solve the problems of congestion and vandalism affecting rail around Veracruz in the near term.

“Building the car park is indeed a good project but we are talking about removing five hectares from current capacity [while it is being built],” said Flores. “What is the Federal Government doing to address the space during 2018?”

With the new facility located 5km from the main vehicle off-loading area at the port, questions were also raised about why it wasn't located near Pier 1.

Luz Eugenia Torres Diaz (pictured), commercial manager at the port of Veracruz, said there was always cost associated with development and highlighted the benefits its expansion would bring. She admitted, however, that this expansion should ideally have been underway five years ago.

She went on to say that carmakers including VW, Nissan, Honda and Mazda were working with the port authority on a brand quality project and that the port was using an IT platform to improve efficiency through better management of space and the removal of paperwork.

“That has allowed us to understand the different carmakers' operation times, which have been reduced to between four and five days in some cases,” she said.

The new platform has been developed with the customs agency at Veracruz, together with API (the port's administration body). According to Diaz, it provides information to all parties about production at the various carmakers’ plants as well as the number of vehicles being moved on ocean vessels and vessel dwell times at the port. With this information, Diaz said, the port had improved its service for carmakers and was now working on expanding the platform.

Roberto Zavala, managing director and head of Mexico, WWL Vehicle Services, said the issue at Veracruz had always been about the timing of investments made to deal with capacity issues and that moves to improve rail access were not happening quickly enough.

“The vehicle volume was over a million last year and only three or four years ago it was half that,” he said. “That increased volume was moving through the same basic infrastructure, which meant a lot of challenges for the logistics providers and OEMs.”

Zavala said those companies were now looking at alternatives, including Tuxpan port (which Audi, for example, already has plans to use). At the port of Altamira, meanwhile, which has also increased throughput, Zavala noted a rise in the development of surrounding facilities as a result of the slow pace of developments at Veracruz, including recent moves by Horizon Auto Logistics in the area.

Veracruz remains the biggest vehicle handling port in Mexico. Last year, approximately 564,000 vehicles were exported with 467,700 landed, and 76% of that volume moved to and from the port by truck. According to Diaz, Veracruz currently has sufficient handling capacity for 1.4m vehicles with a seven-day processing average (down from 20 in previous years), and accounts for 60% of all vehicles moved in and out of Mexico's ports.

Veracruz offers two main road links arcing north to the central automotive production region via Puebla as far as Aguascalientes. It is also the only port with terminal rail access for bi-level and tri-level finished vehicle rail wagons, and handles 142,000 trains annually.