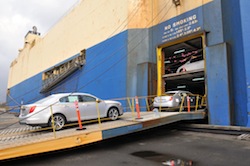 Ford will begin export shipments of vehicles from the US to China through the port of Portland in Oregon in the next few weeks. It is the first time that Ford has used the port for exports to China, although it established shipments to South Korea from there last year.

In December, Ford will begin using Portland exclusively for shipments to China, with Auto Warehousing Company (AWC) processing the vehicles. Currently, all Ford shipments to China go through FAPS terminal at port Newark in New Jersey.

The vehicles, which include the Edge crossover and Explorer SUV, will be transported to Portland from plants in the US, Canada and Mexico and volumes are expected to grow to 40,000 next year, according to a statement from the port. Ford said it had chosen the port in parts thanks to frequency and number of shipping services to China, which is served from Portland by ocean ro-ro carrer, Eukor. Ford has also cited the competitive cost of using rail to transport the vehicles from its plants to the port of Portland.

Last year Ford exported 8,300 vehicles from the US to China. Volumes should rise next year in part because Ford will start selling its premium Lincoln brand in China. Last year, Ford chief executive CEO said that Ford would initially export Lincolns from North America, although it would consider eventually producing the vehicles locally.

A $2.8m project is nearing completion at Portland to expand the processing building at Terminal 6 by 2,500 square metres and increase capacity to more than 110,000 vehicles annually. The expansion was financed by ConnectOregon IV, a grant from the state for infrastructure funding, as well as a $560,000 investment by AWC.

“There is great potential to grow this business as our expertise and available capacity matches growing demand for Ford vehicles in China,” said Ben Seher, president of AWC. “By better utilising transpacific car carriers returning to Asia, this will be good news for everyone involved.”

The company has been processing Hyundai vehicles for delivery to dealerships Terminal 6 since 2005. Hyundai processed its 2 millionth vehicle through the port in July this year.
http://www.automotivelogisticsmagazine.com/news/hyundai-hits-2m-mark-and-expands-at-portland

Ocean carrier Eukor, which brings the imported Hyundais into the terminal, will be loading the Ford vehicles for the eastbound journey.

Portland handled almost 280,000 vehicle imports in 2012, making it the seventh busiest vehicle import location in North America and eighth largest overall. The majority of imports were made up of vehicles from Toyota, Honda and Hyundai. Scion, Lexus and Acura are also processed there. Toyota Logistics Services has a processing facility at the port on Terminal 4.

By contrast the port exported just more than 4,100 vehicles as Ford began shipping to South Korea. They were, however, the first vehicle exports since 1988.

“We are proud to be serving as the primary gateway for exports of new Fords to China and furthering our mission to provide access to international markets,” said Bill Wyatt, executive director for the port of Portland. “This new business will provide local jobs and economic benefits, but also fulfills a national role for Ford vehicles manufactured in plants throughout North America.”