Ghent on a roll with new rail terminal and crossdock 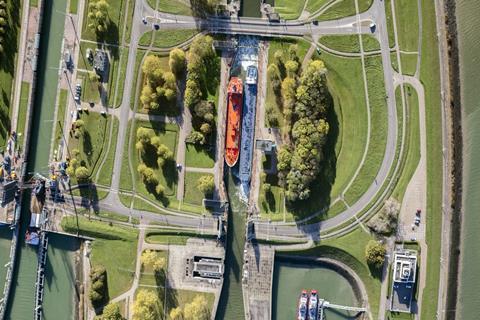 North Sea Port, the merged port authority operating at Ghent, Vlissingen and Terneuzen, has signed a letter of intent with Turkish firm Ekol Logistics and Belgian group Transuniverse Forwarding to build a multimodal site at Kluizendok.

Transuniverse Forwarding already operates an 8,000 sq.m crossdock at Ghent, through which it moves groupage shipments to and from Europe, the Middle East and North Africa (Mena). However, according to the company, these shipments have grown beyond the capacity of the existing facility and a new 20,000 sq.m crossdock is planned.

“We have taken an option to build a new 20,000 sq.m crossdock centre on a site covering 10 hectares,” confirmed Frank Adins, chairman of Transuniverse Forwarding Group. “According to the preliminary plans, the building will be more than 300 metres long and 60 metres wide and will number 140 loading docks/platforms. Because it is so big, some of the transhipment there will be automated or robotised.”

According to the current plans, the new transhipment building will be operational by the end of 2021.

Transuniverse is currently moving around 100 trucks and intermodal containers per week through Ghent. However, once the new buildings are operational the company expects to be able to double this within five years. According to North Sea Ports, every week, 20 Ekol trains will depart from the railway terminal in North Sea Port, linking it with the European hinterland and the terminal will tranship 2m tons of goods.

With regard to the ro-ro terminal at Kluizendok, there are further growth opportunities for containers and trailers moving to the UK, according to Adins.

“The growth opportunities for cargo transhipment between Ghent and the UK are considerable,” said Adins. “Brexit is expected to cause major congestion in the Channel ports. This will create opportunities to organise transport by ship to more northerly ports in the UK, in conjunction with rail connections to and from the European hinterland.”

The ro-ro terminal will be operated by a third-party logistics provider that has yet to be announced.

Outbound business at Ghent
While the majority of finished vehicle shipments are moved by Cobelfret through Vlissingen port, DFDS does move Volvo volumes through Ghent, which last year amounted to more than 101,000 cars.

According to a spokesperson for North Sea Port one of the positive drivers of finished vehicle business there was the start of production of the new Volvo model XC40 at the carmaker’s plant in Ghent.

“New models and new investments have strengthened the ties between both Volvo production plants and North Sea Port,” said the spokesperson. “The activity in the European distribution centre of Honda in Ghent is also still going strong. We see little slowing down of the shipments through our car terminals (DFDS and Cobelfret) and as a port authority we try to stimulate new modal shift initiatives to shift transports from and to the terminals from the road to barge or train.”

The question remains what will Brexit mean for continued trade in parts and finished vehicles through the ports?

“For our terminals, distribution centres, as well as production plants, there will be consequences and changes in the future,” said the spokesperson. “What will be the demand for cars in UK? What will happen with the production sites in UK? How will supply chains be adopted? Will there be import dues?”

Echoing Adins’ point, North Sea Port said that all of the companies operating there were preparing themselves for a worst case scenario and have installed procedures and emergency plans in case of a no-deal Brexit, which would have negative consequences for business.