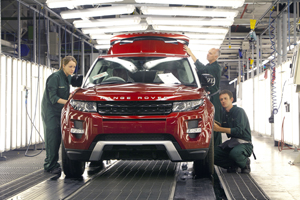 Jaguar Land Rover (JLR) has reported its best ever October sales with year-to-date figures for 2015 also up on the same period in 2014. However, a dramatic drop of around 30% in China for the three months to September 30th has affected global results for the quarter.

Year-to-date sales were 67,612, down 1% year-on-year with overseas markets that are in difficulty, including Russia and Brazil, down 5%.

China was also a difficult market, however, with JLR’s spokesperson confirming that retail sales were down 27% year-on-year in the July-September quarter. The company explained this being due to a period of adjustment as the growth of the economy there slowed down and the automotive market matured. The spokesperson told Automotive Logistics that in addition it had several important new model transitions in China, which had impacted sales in the short term.

However, sales in China did start to pick up in October and showed a 9% increase on the same month last year with just more than 8,100 vehicles sold there. This reflected an increase in the demand for Range Rover and Range Rover Sport models, as well as the fact JLR has started selling the Jaguar XE in China.

Commenting on the performance, Andy Goss, group sales operations director said, “Regional retail sales growth was strong, with USA and UK having their best ever October and Europe significantly up on last year.  It is also encouraging to see overall sales in China picking up again, reflecting increased demand for the Range Rover Sport and Range Rover, as well as start of sales of the Jaguar XE.”

Logistics partners
Jaguar Land Rover exports the majority of the vehicles it sells around the world from the UK, though it opened a plant in Changshu last year with Chinese carmaker Chery.

Nevertheless, a large proportion of parts for that facility are also supplied from the UK. DHL Supply Chain, JLR’s lead provider in Europe, collects and consolidates European material together with UK-bound material, delivering it to an Export Sales Centre in Hams Hall, near Birmingham. According to Chery JLR senior manager for MP&L, Alex Holland, logistics provider Syncreon runs this centre, with responsibility for packing and consolidating the material into sea and air freight shipments. Material is then handed over to Sinotrans for onward transport to China up to the gate of a deconsolidation centre just over the road from the plant’s receiving dock in Changshu (read more here).

Asked how it was meeting demand for the increase in sales with its outbound logistics providers, a spokesperson for the carmaker said, “We work with our key suppliers, sharing forward volumes to ensure capacity is in place as our volumes have grown. A reliable, competitive outbound logistics service is a critical link in the supply chain that enables us to deliver great cars to our customers across the world.”