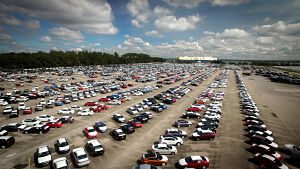 Power has been restored to the Colonel’s Island Terminal in Georgia after Hurricane Matthew hit over the weekend, according to the US state’s port authority. Rail services are also available for all port facilities.

Colonel’s Island is one of the three deepwater terminals at the Port of Brunswick. The dedicated ro-ro facility helps make Brunswick the third busiest port in the US for total cargo and second busiest for ro-ro imports. More than 12 major auto manufacturers, supported by three auto processors, use the terminal.

In October last year, Georgia Ports Authority (GPA) said it would invest $152m over a decade in improving facilities at the Brunswick to keep pace with demand. The expenditure was almost three times that invested during the previous decade and included a fourth berth for ro-ro cargo at the Colonel’s Island Terminal.

“We are glad to report that our Garden City Container Terminal appears to have had little impact from the storm,” said the GPA in a statement on Sunday.

“Generated power is in place and our information technology systems are up and running. No major flooding was experienced at either our Garden City Terminal or Ocean Terminal in Savannah.”

The storm, which has since weakened and been downgraded, has left hundreds of casualties – mostly in Haiti, where official figures put the death toll at more than 330.