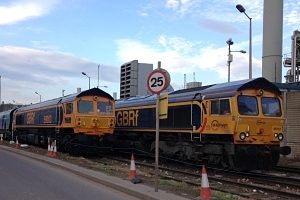 Groupe Eurotunnel (GET) has announced the potential sale of GB Railfreight to private equity heavyweight EQT.

The value of EQT’s bid to buy the third largest rail freight operator in the United Kingdom has not been disclosed.

While the offer is still to be presented to the group’s staff representative bodies for consultation, GET’s chairman and chief executive, Jacques Gounon, is confident the right buyer has been found.

“I am convinced that EQT is the right owner to take GB Railfreight to the next level, given their strong focus on growth and sustainable long term value creation,” said Gounon.

GB Railfreight was founded in 1999 by current chief executive John Smith and acquired by Groupe Eurotunnel in 2010 for £25m ($30.5m). It has since more than doubled its activities, with current forecast annual revenue of £125m.

GET’s French rail freight activities, managed by Europorte in France, are not included in the offer received.

In July, a train transporting finished vehicles travelled through the Channel Tunnel for the first time in five years on a route from the UK to Belgium. GB Railfreight had provided the train on behalf of European automotive transport specialist STVA UK, beginning a new contract in early July between the two for one train a week carrying finished vehicles from Bristol to Ghent.

GB Railfreight operates over 1,000 trainloads of freight a week, moving about 15% of the UK’s rail freight. Over 50,000 finished vehicles are transported across the UK per annum. Its strategy is to expand the portfolio and introduce options for automotive components.

Pressure on rail businessThe group's rail business in the UK and across the continent has struggled over the past year, with further uncertainties raised by the prospect of Brexit. It has, however, seen some relief in the last few months.

For the first nine months of the year through September, revenues for the Eurotunnel Group reached €902.1m ($989m), up 3% compared to the same period in 2015, excluding the group's MyFerryLink.

Revenues from use of the railway network, however, have fallen 4% so far this year, to €221.1m. Rail trade between the continent and the UK has been particularly weak, affected in large part over the past year by disruptions related to strikes and to the migrant camp in Calais known as 'The Jungle', which caused customers to change routes. In the first nine months of the year, the number of freight trains passing through the Channel Tunnel was down 33% to 1,327.

The difficulty in the rail market has also been seen by DB Cargo – which uses the tunnel link to run freight trains – as it announced it would cut 900 jobs in the UK, in part because of falling coal trade between the UK and Europe.

There has been some relief in rail trade of late. According to Eurotunnel, the number of rail freight trains using the tunnel was stable in the third quarter with a change in trend at the end of the summer period and increases in August (up 11%) and September (up 30%), compared to the same period last year.

The Calais migrant camp is set to be dismantled by the end of this year.