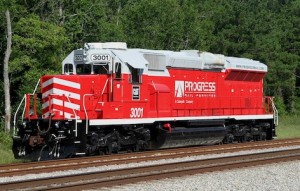 Caterpillar’s subsidiary, Progress Rail, which provides locomotive and railcar repairs to some of North America’s leading rail providers, is reported to have lost a number of contracts to rival services provider TTX. The news comes as Progress Rail goes through a federal investigation into whether it has been mischarging customers for parts that did not need replacing and dumping those parts to conceal evidence.

The Wall Street Journal reports that the subsidiary has now lost rail repair contracts, including with BNSF, at a number of terminals, including those at the ports of Long Beach and Los Angeles. Rival rail services provider TTX is reported to have picked up contracts at the port terminals, as well as those at San Bernardino, San Diego, Oakland, Stockton, and at Glendale in Arizona, also owned by BNSF.

The major rail providers in North America, including BNSF, have refused to comment on the situation. Progress Rail and Caterpillar would not respond to questions. Similarly TTX said it would not comment on contracts or related business.

However, a Caterpillar spokesperson quoted in The Wall Street Journal said that the recent loss of contracts was unrelated to an on-going investigation into the mischarging allegations and those that related to parts dumping, which is alleged to have taken place near the Terminal Island facility at the port of Long Beach.

As reported by The Wall Street Journal last year, a grand jury investigation by the US Attorney for the Central District of California is examining whether the company has been dumping brake parts and other items to conceal evidence that it was charging for rail equipment that did not need replacing.