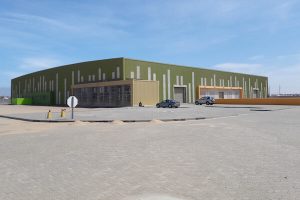 Production of Opel’s Grandland X and the Peugeot 3008 from semi-knockdown (SKD) kits will begin at the PSA group’s new assembly plant in Walvis Bay, Namibia, before the end of this year. Meanwhile, Nissan has revealed it aims to be the first carmaker to assemble vehicles in Ghana.

PSA’s Walvis Bay development is part of a production and marketing drive in Africa the OEM is undertaking with a view to producing 70% of group vehicles sold on the continent there.

Opel would not reveal where the SKDs will be supplied from, but a spokeswoman said the move to local assembly would increase historically very limited sales in Namibia. SKD kits are not as expensive to import to the country as new finished vehicles, which are subject to a 30% tax if they come from outside the Southern African Customs Union (SACU).

Opel’s sales in Namibia are handled by Auas, under sub-contract from South Africa’s Unitrans. Both are “very strong partners which will help us to foster growth,” the spokeswoman told Automotive Logistics.

The group’s initial target volume at Walvis Bay, set up in partnership with the Namibia Development Corporation (NDC), is 5,000 vehicles a year by 2020, starting with the Grandland X and Peugeot 3008 in the fourth quarter of this year. Other vehicles will follow, based on customer demand in the SACU countries of Botswana, Lesotho, Namibia, South Africa and Swaziland, the spokeswoman said.

Opel’s sales should be boosted by being part of PSA, which acquired it from General Motors last year, she added, pointing out that increasing sales outside Europe was a key pillar of the group’s PACE! strategic plan, launched a year ago. This aims to achieve more than 10% of annual sales outside Europe by the mid-2020s through strengthening its presence in 15 markets in Asia, Africa and South America, and entering more than 20 new export markets by 2022.

Manufacturing in GhanaMeanwhile, Japanese OEM Nissan has signed a memorandum of understanding (MoU) with the government of Ghana to establish an automotive manufacturing industry in the country.

The company will also make Ghana the hub for group sales and marketing in West Africa, as part of a wider plan to boost production and sales in “new frontier markets”. Nissan models accounted for 32.8% of all vehicle sales in Ghana last year.

The company sells its cars, pickups and SUVs in Ghana through a network of six sales and service outlets. “Building vehicles in Ghana will enable us to further improve the products and services we offer to our customers here and will have significant, long-term benefits for the economy in terms of jobs and growth,” said Mike Whitfield, MD of Nissan Group of Africa.

Working closely with the government and other members of the African Association of Automotive Manufacturers (AAAM), Nissan said it would provide global expertise to establish a sustainable automotive manufacturing industry in the country. The agreement builds on investments in Nigeria where, in 2013, it became the first major automaker to assemble cars.

“Establishing a long-term automotive industrial development policy will give investors further confidence in Ghana,” said Whitfield. “Properly administered automotive development policies can bring about structural economic change in a short time. We've seen this happening with our plants in South Africa and Nigeria.”

President Nana Addo Dankwa Akufo-Addo pledged the government’s full cooperation with Nissan to make the investment a success for both parties.

Vehicle sales in Ghana have been growing at an annual rate of about 10% and now stand at around 9,150 vehicles a year.