PSA and Saipa sign up to joint production in Iran 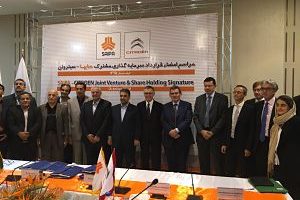 Carmakers PSA Peugeot-Citroën and Saipa have agreed to form a new joint venture to build and sell Citroën vehicles in Iran. The joint venture will encompass everything from design and purchasing to vehicle marketing.

The move comes just after rival French carmaker Renault announced at the Paris Motor Show that it was boosting output in Iran via a joint venture with Iran’s Industrial Development and Renovation Organisation (IDRO).

The PSA-Saipa deal will involve an investment of more than €300m ($335m) in manufacturing and R&D capacity over the next five years. Saipa, the second largest carmaker in the Middle East and North Africa, has been Citroën’s partner in Iran since 1966.

From next year, Citroën vehicles will be imported into Iran, with local production at the Kashan plant of three vehicles adapted for the Iranian market beginning in 2018. The Kashan plant will be 50%-owned by PSA Group.

Citroën models will be sold throughout the country via a network of dedicated dealers. A total of 150 Citroën outlets will open in the next five years, according to PSA.

At the start of this year, not long after international sanctions against Iran were lifted, PSA announced a 50/50 joint venture with Iran Khodro, the country’s biggest vehicle maker. The venture covered local production of the Peugeot 208, 2008 and 301 models.