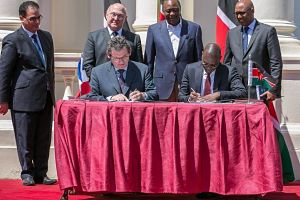 The signing ceremony took place at the Kenyan State House, the president's official residence in Nairobi

French carmaker PSA Group is to begin producing Peugeot vehicles in Kenya from June this year. The news marks a return to the East African country for the company, which last assembled Peugeot cars there between 1974 and 2002.

Production will take place in partnership with URYSIA, its local importer and distributor since 2010.

PSA says assembly will start with the Peugeot 508, followed by the new Peugeot 3008 SUV. Initial production will total 1,000 units a year for the local market.

Government incentives in Kenya have helped boost vehicle production, with more than 10,000 finished vehicles assembled there in 2015, according to the Kenya National Bureau of Statistics.

In 2016, Volkswagen signed an agreement with the Kenyan government to start building the Polo Vivo at a plant operated by Kenya Vehicle Manufacturers (KVM), which assembles buses, trucks and passenger vehicles under contract for a range of OEMs, including Nissan, Hyundai and MAN.

The PSA news is the latest in a string of local production initiatives announced by the company.

In October, it agreed to form a new joint venture with local company Saipa to build and sell Citroën vehicles in Iran. Soon after, it struck a deal with long-term partner in Tunisia, STAFIM, for the assembly of a Peugeot pick-up truck in the North African country.

Jean-Christophe Quémard, PSA’s vice-president for the Middle East and Africa, said: “This investment in Kenya is part of the long-term strategy of the PSA Group to increase its sales in Africa and the Middle East, with the aim to sell a million vehicles in 2025.

“These local production capacities will serve the region's markets and meet the expectations of our customers and the specific features of each country.”