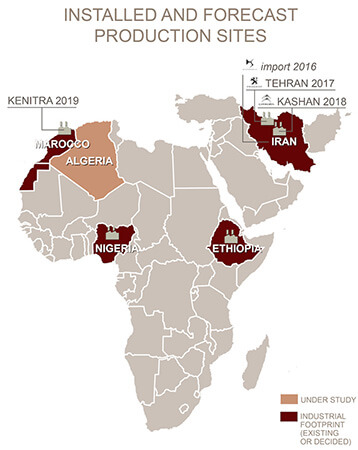 French carmaker Groupe PSA has said this week that it is suspending all joint venture activity in Iran, following the withdrawal of the US government from the Iran nuclear deal, otherwise known as the Joint Comprehensive Plan of Action (JCPOA).

The JCPOA was signed on July 14 2015 between Iran, the five permanent members of the UN Security Council – China, France, Russia, the UK and the US – Germany and the European Union. Under the agreement, Iran agreed to cut its stockpile of nuclear material and suspend the development of certain nuclear facilities for 15 years in exchange for the lifting of sanctions. Existing sanctions were widened in 2011 to affect commercial interests by major Western powers in response to suspicions that Iran was continuing to develop a nuclear weapon and delivery system.

Those sanctions were lifted in January 2016 in a move seen as a major step forward for Iran’s domestic car producers and those international brands, including PSA, eager to make the most of pent-up demand in the Iranian market. Iran is a market of 80m people and has been the most significant automotive production and sales market in the Middle East. Light vehicle sales had reached 1.68m units in 2011.

PSA Group, along with a number of other carmakers including Renault that were big in Iran before the sanctions were first imposed, returned there to make cars in 2016. The country has huge potential for vehicles sales, both within its own borders and as production access point to the wider Middle East and North Africa regions.

Within a week of the sanctions being lifted in 2016 PSA signed a 50-50 joint venture agreement with Iran Khodro and followed that with another with Saipa the following October. It said the purpose was to offer Iranian customers modern Peugeot and Citroën vehicles compliant with safety, comfort and environmental standards.

Against advice from European counterparts in the deal, Trump announced the US’ withdrawal from the Iran nuclear deal in the first week of May and has threatened that tariffs could be applied against companies in Europe continuing to trade and manufacture with Iran.

The US plans to reimpose sanctions against Iran subject to 90-day and 180-day wind-down periods. The first deadline is on August 6 this year and affects the automotive and aviation industries, the purchase of US dollars, and trade in gold and certain other metals.

PSA said it had begun to suspend activity ahead of that date. The carmaker said it was monitoring the regulatory context and was in contact with the authorities of the countries involved to remain compliant with all regulations.

“With the support of the French government, Groupe PSA is engaging with the US authorities to consider a waiver,” said the company in a statement this week.

PSA declined to comment on what the cost of stopping production would be, given its substantial investment in Iran since 2016, or whether its joint venture partners would continue to manufacture at the facilities it had helped set up. Last year, it made 445,000 vehicles in the country.

Renault-Nissan, which also has substantial investment in Iran, said it would not be making any comment on its plans in the country.