PSA talks with labour and governments over Opel deal 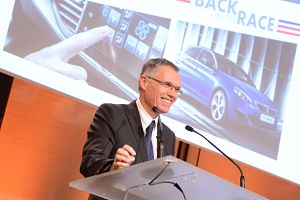 Senior management officials within PSA Group have made a number of commitments regarding jobs and plants in meetings with Opel stakeholders this week in Germany and the UK – promises that could impact the future shape of a combined PSA-Opel supply chain across Europe.

PSA has met with the UK business secretary, Greg Clark, and spoke to prime minister, Theresa May by phone on Wednesday.

The message out of the prime minister's office following the call was that she had "reiterated government’s commitment through [its] modern industrial strategy to creating and supporting the right conditions for the UK automotive industry to go from strength to strength."

"A particular shared goal was strengthening the UK's automotive supply chain," added the spokesperson in a statement cited widely in the media.

Greg Clark's meeting with PSA management and the French industry minister last week elicited a restrained form of commitment if his comments to the House of Commons on February 20th are anything to go by: "One of the points the PSA executives made to me was that since the new management of PSA has been in place, they have taken some pride in having part of their strategy not to close plants," he said.

With the British new vehicle market expected to slow and Brexit casting a shadow over the future of vehicle and parts supply between the UK and Europe, there are questions over whether PSA's primary commitment may be to its German and continental European plants, leaving its two British sites more exposed.

However, the carmaker has so far indicated that it would provide plant and job guarantees should a deal to acquire Opel be finalised.

Labour commitmentsIn a meeting with the leaders of IG Metall, and the European Works Council, Tavares said his company would respect the existing agreements that Opel had with its labour and would continue the dialogue with all parties.

Wolfgang Schäfer-Klug, head of the Works Council, said after the meeting: “This commitment and the agreement of a further negotiation process provides the basis of further talks with PSA."

He went on: “Tavares communicated convincingly in the talks that he is interested in a sustainable development for Opel/Vauxhall as an independent company.”

Tavares has since spoken by phone with Angela Merkel where he is said to have made a similar commitment to allow Opel to be an independent company post-merger.

Reuters cited Merkel’s spokesperson Steffen Seibert as saying: "[Tavares] stressed to the chancellor that PSA would preserve the independence of Opel in a merged company and would give plant, investment and job guarantees.”

Vauxhall’s futureUnions and the government in the UK have shown similar concerns about the future of Vauxhall’s production facilities if that division is sold to PSA. Ana Nichols, automotive analyst at the Economist Intelligence Unit, said Vauxhall’s UK plants have survived previous threats to their existence thanks to their high productivity, but there were several reasons they could be under threat once again if the merged group wants to cut European production in future.

For one, she said layoffs were generally easier in the UK than other parts of Europe, although she added that the Vauxhall plants were highly unionised, which could complicate the process.

In addition, the French government’s shareholding in PSA may also result in local political pressure to prioritise saving jobs there, and to a lesser extent also in Germany.

Nichols also pointed out that the UK vehicle market is slowing faster than both the French and the German ones.

And finally she said the UK’s decision to leave the EU last year could play a role.

“Brexit will make it harder to integrate the UK plants into EU supply chains and may raise tariff barriers for exports.”

This could of course have the reverse effect of forcing the company to retain local production to avoid those very same cross-border tariffs on imported vehicles, said Nichols.

“Given these arguments, the UK government may face a difficult task trying to extract promises from PSA, especially if (as reported) the carmaker has already pledged to keep Opel's German plants open.

Breaking evenVauxhall employs about 4,500 workers in the UK, making cars in Ellesmere Port and vans in Luton. The Ellesmere Port plant in particular has consistently ranked among GM's most efficient plants, according to Nichols.

Ellesmere exports the bulk of its production to Europe, while importing the majority of components from overseas.

The Vauxhall business is also carrying a high-pension deficit, which may also play a role in both the acquisition negotiations and future of the plants.

In its annual results announcement earlier this month, GM said Brexit-related losses, largely related to the weakening of the pound following the referendum, meant the company failed to break-even in Europe in 2016.

GM’s European business has reported a loss for the US carmaker in every year since 1999 and, according to private bank Berenberg, is estimated to have burned $11.7 billion of cash between 2010 and 2016. GM pulled out of a deal to sell the business in 2009.