PSA to assemble pick-up trucks in Tunisia for local market 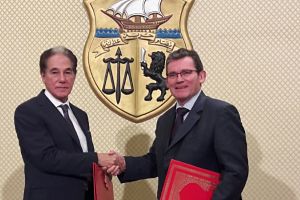 PSA Group has announced a deal with its long-term partner in Tunisia, STAFIM, to assemble and sell a Peugeot pick-up truck in the North African country.

The French carmaker said the assembly plant would start operations in mid-2018 and produce about 1,200 vehicles a year for the Tunisian market. PSA generates annual sales in excess of €250m ($266m) in the country.

Jean-Christophe Quémard (pictured, right), PSA’s vice-president for the Middle East and Africa region, said: “As a long-standing partner in the growth of the Tunisian automotive sector through its three brands, Peugeot, Citroën and DS, with this project, the PSA Group shows its intent to lead."

The letter of intent between the two parties was signed at the Tunisia 2020 international conference on investment held this week in the capital, Tunis.

This week’s news follows June’s announcement that PSA plans to build a €557m ($645m) production plant in Morocco. From 2019, that plant will produce B and C segment engines and vehicles to meet the needs of the region and of Moroccan customers. Starting with initial production capacity of 90,000 engines and vehicles, the Moroccan plant will raise its output to 200,000 units in line with future demand.

PSA also announced a deal in October with long-term partner Saipa in Iran to form a new joint venture to build and sell Citroën vehicles there.

Speaking recently at the first Automotive Logistics UK summit, Philippe Funda of PWC Autofacts said the Middle East and Africa region would become one of increasing importance to the automotive industry. “They are tiny volumes, and it’s not all full assembly of course, but these markets are speeding up,” he noted.

Expectations are for annual production capacity in the region, including South Africa, to grow from 3.7m units in 2015 to 4.4m vehicles by 2022. While small in numbers, the growth rate of 19% compares favourably with other regions across the same timeframe, including South America, which he forecast would grow by 10%, and Asia Pacific (13%). EU production capacity, meanwhile, was forecast to grow by 5.8% in the same period.

Last week VW announced another African deal, this time setting up a joint venture with its local partner in Algeria for the assembly of VW, Seat and Skoda brands, including commercial vehicles.