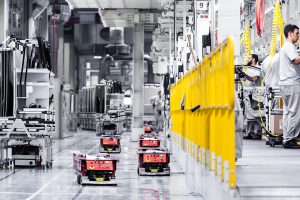 French carmaker PSA Group is to reorganise operations across Europe to boost regional competitiveness by improving the performance of its powertrain plants. Some production will be transferred from Asia in line with company plans to make components as close as possible to its car plants, thus cutting supply times and logistics costs.

The actions will also prepare manufacturing for the changing power mix in cars as the shift to electric vehicles gathers momentum, the company said, and better absorb Opel and Vauxhall models into the group’s production arrangements including fitting them with PSA powertrains and technologies. PSA acquired the makes from General Motors for €2.2 billion last year.

PSA will further increase production of the three-cylinder Turbo PureTech petrol engine. In addition to continuing with the ongoing doubling of production capacity on 2016 levels at the Douvrin and Trémery plants in France, the group will produce PureTech engines in Tichy (Poland) and Szentgotthárd (Hungary) from 2019.

The Trémery factory will be prepared to make electrical motors starting in 2019, with production accelerating after 2021, thanks to a joint venture signed with Nidec of Japan late last year. At the time, the companies said they would invest €220m ($273m) in electric motor production in France for domestic and global distribution. Those initiatives will support PSA’s electrification push, as the group intends its whole vehicle range will include an electrified offering by 2025.

Production of gearboxes will increase from next year through the manufacture of the automatic version in Valenciennes (France). Annual capacity will reach 300,000 in 2020 when production of six-speed EAT6 automatic gearboxes is introduced. They will equip the Peugeot, Citroën and DS models, as well as the Opel and Vauxhall models produced on PSA’s platforms.

The group has invested in a new machining and assembly plant at Valenciennes in a strategy to double sales of models equipped with automatic gearboxes.

Currently made in Japan and China by Aisin AW, the transfer of gearbox production under licence to Europe is possible through PSA’s tie-up with the Japanese powertrain manufacturer.

“After 15 years of perfect partnership in the development and supply of automatic transmissions, this licence production agreement in France contributes to strengthen the strategic relationship between Aisin AW and Groupe PSA,” said Yannick Bézard, executive vice-president purchasing for PSA.

In addition, the group will invest in producing greater volumes of manual ML gearboxes in Metz-Borny (France) and MB6 gearboxes in Aspern (Austria), with a view to equipping its high-end and light commercial vehicles as well as serving the growing needs of producing Opel and Vauxhall vehicles.

As well as adding agility to the manufacturing base, a key part of the new strategy is to adapt output to customer expectations, taking into account technological and energy shifts, the group added.

It also said the decisions were based on a performance assessment of manufacturing sites and in line with a growth plan agreed with five of six trade unions, and took into account the corporate plan intended to improve performance at Opel and Vauxhall.

Assembly in AfricaMeanwhile in Africa, PSA has signed a joint venture agreement with the Namibia Development Corporation (NDC) to begin operations at an assembly plant in Walvis Bay. Production will start in H2 2018 with a target volume of 5,000 vehicles per year by 2020. The first will be the Opel Grandland X and Peugeot 3008, and sold primarily in Namibia, South Africa, Bostwana, Lesotho and Swaziland.

The accord with the NDC meets PSA’s goal of producing within Africa 70% of the vehicles sold in the region.

Regional executive vice-president Jean-Christophe Quemard said: “This investment in Namibia is part of the long-term strategy of Groupe PSA to increase its sales in Africa and the Middle East, consistent with our target to sell one million vehicles in 2025.”

PSA said the go-ahead for production of Opel in southern Africa was decided and implemented in record time, less than four months after announcement of the group’s corporate plan for Opel and Vauxhall.