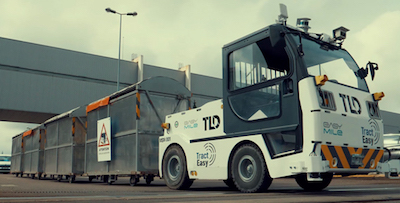 Groupe PSA is trialling an autonomous tow tractor at its Sochaux car plant in eastern France. The aim, of what the company describes as a world first in the manufacturing sector, is to improve operational flexibility in getting parts to the assembly line.

Following successful trials conducted in May, a connected road will be built before the year ends to enable the TractEasy vehicle to deal with road infrastructure more effectively.

In the first quarter of next year the intention is to operate two autonomous tow tractors in shifts round-the-clock, firstly to the Peugeot 3008 assembly line and later the Peugeot 308.

“The Sochaux plant offers a wide variety of real-life test scenarios, with rail lines, intersections, traffic lights and one-way roads. The solution set up on this test circuit and the adjustments it requires can be easily transposed to other circuits and other locations,” PSA said.

TractEasy travels at up to 15kph at Sochaux, the plant’s speed limit, making 3km round trips between the supplier park and assembly shop, delivering parts such as bumpers, tailgates and consoles.

With a maximum towing capacity of 25 tonnes, TractEasy has the ability to drive among other vehicles at speeds of up to 25kph. It was developed by French company EasyMile, which specialises in autonomous vehicle technology, in partnership with compatriot TLD, which provides ground equipment at airports.

TractEasy was initially developed as an autonomous electric baggage tractor to enable indoor and outdoor driverless operations at airports without the need for extra infrastructure. It is now also being offered as a tow tractor that improves operational flexibility at manufacturing plants and logistics centres, as well as airports.

PSA describes the partial automation of Sochaux’s logistics operation as an illustration of industry 4.0 solutions for the Sochaux 2022 future plant project.

Testing is being conducted with EasyMile through PSA’s business lab programme, which is designed to detect, test and transform opportunities into new activities for the group, including outside its core automotive market.

The Sochaux plant produces 2,100 vehicles per day for the Peugeot 308 and 3008 and Opel Grandland X line-ups.