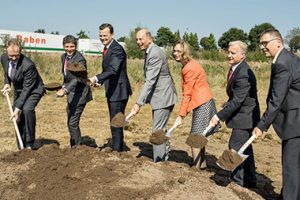 European logistics provider Raben Group is investing €6.5m ($7.3m) in the expansion of its Eisenach contract logistics facility in Germany, which handles automotive parts for customers in the region.

The company held a ground-breaking ceremony last week at which its CEO in Germany, Daniel Rösch, said the facility would become a central hub for the Raben cargo network in the country.

The Eisenach facility handles national and international groupage, and part and full loads. It provides sequencing, picking and just-in-time/just-in-sequence deliveries.

The company is building a new hall at the site and extending the existing one, as well as adding a workshop and an office complex. The work will add 5,000 sq.m to the existing 12,500 sq.m of warehouse space and the first phase of the construction work is expected to be complete by the end of this year.

Eisenach is home to one of GM Europe’s Opel assembly plants, which makes the Corsa. Tier one suppliers in Eisenach include Lear, which has a seating plant there.

In other news, Raben’s division in Poland – Raben Logistics Polska – has just leased three warehouse facilities from property developer Panattoni Europe. The facilities, which cover more than 42,500 sq.m in total, are all sited at Panattoni Park Grodzisk, southwest of Warsaw. The park is near the Grodzisk Mazowiecki junction on the A2 motorway and near the planned bypass of Grodzisk Mazowiecki. Construction of the facilities will begin this month and is due for completion at the end of 2017.