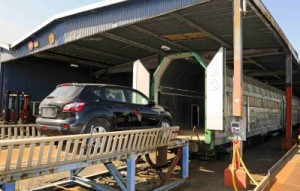 [This story was update on 27 October] The port of Gothenburg in Sweden has announced the completion of a new €2.3m rail track at the car terminal operated by logistics provider Logent. The first rail wagons have started using the line to deliver inbound Renault and Nissan vehicles for distribution to dealers throughout Sweden.

"We are now able to offer the automotive industry more efficient, climate-smart distribution solutions which is extremely pleasing,” said Anders Madsen, president of Logent Ports & Terminals. “There are also firm indications that rail will be in a strong position when it comes to car transport in the future."

The track, which was begun 18 months ago, is 500 metres long and is linked directly to the terminal's pre-delivery inspection (PDI) facility, where cars that are imported into Sweden are adapted for the market before being transported to various parts of the country. Up to 300 cars can leave the terminal by rail each day at full capacity.

According to Mikael Myntti, manager of strategic development and sales at Logent Ports & Terminals, the track reestablishes the connection that was cut in 2012 when construction work began on the flyover bridge entrance to the port which crossed the railyard. Logent has had an agreement with APM Terminals in the interim period to use its tracks.

"[I]t means that we can re-introduce rail transports from the immediate vicinity of the quay area and the PDI-facility," Myntti told Automotive Logistics. "The shorter shunting distances and dedicated marshalling areas enable an efficient handling."

In a statement the port of Gothenburg also said that the rail system could be used for exports from Sweden, which include passenger vehicles, truck chassis and construction equipment.

"Being able to travel straight to the quayside at the car terminal by rail allows Swedish companies to reach their export or import markets directly without transhipment at a port on the continent,” said Magnus Kårestedt, CEO at the port of Gothenburg. “Anything that can reduce the distance and increase accessibility is crucial to the competitiveness of industry."

Logent said that its facility was a common-user one which meant that any train operator could schedule calls at its rail siding but it would not comment on specific customers or volumes. The port of Gothenburg confirmed that Logent Automotive, Autolinc and Motortransport are involved in provideing rail services there.

In September the vehicle terminal handled around 5,500 units (3,500 exports and 2,000 imports). Renault-Nissan, Ford, Duster, Volvo, Suzuki and Mercedes-Benz are among the main carmakers using the terminal and its rail link.