Rail providers boost services for automotive between US and Mexico 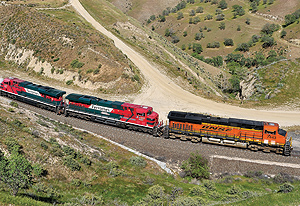 Following the severe disruption to North American rail capacity this year, as discussed in detail at the recent FVL North America conference, two recent announcements by three of the region’s leading providers offer positive signs for OEMs that those capacity issues are being addressed.

In the first, BNSF Railway and Ferromex have launched an intermodal service between Chicago in the US and Silao in Mexico. At the same time, Kansas City Southern (KCS) has moved its largest dedicated A-Max train from Toledo in the US state of Ohio to the southern, Pacific-coast Mexican port of Lázaro Cárdenas.

Regarding BNSF and Ferromex, the new service will move intermodal containers across the interchange at El Paso, Texas to and from Ferromex’s recently expanded Silao intermodal facility inside the inland port of Guanajuato. Ferromex, which is Mexico’s largest railway, will operate the trains between the border crossing and Silao five days a week.

"Our partnership with Ferromex to launch this service from Chicago to Silao means that automakers and manufacturers in the US and Mexico will now have direct access to the advantages of intermodal rail in the Bajio region," said Steve Bobb, BNSF executive vice president and chief marketing officer. “This service offers Mexico’s fast growing manufacturing sector in the Bajio region a simple way to reduce trucking costs and delays.”

Intermodal hub
According to the rail providers the new service offers a centrally located intermodal hub within 100 miles (161kms) of the Bajio – the major manufacturing centres in Leon, Irapuato, Celaya, Salamanca, Queretaro and Aguascalientes. Of those centres, Honda has recently opened a new plant in Celaya, Mazda at Salamanca and Nissan at Aguascalientes. Nissan and Isuzu had existing plants in Aguascalientes. GM and VW are at nearby Silao.

A spokesperson for BNSF told Automotive Logistics that it expected to be serving automotive customers with the transport of parts for production at automotive plants in Mexico, with intermodal volumes growing in both directions over time. In terms of return shipments the rail provider said it already transports finished vehicles from Mexico as part of its automotive business.

As well as avoiding cross border highway congestion there is a dedicated customer support team to track shipments from the in-gate in Mexico to out-gate in the US 24 hours a day, seven days a week. Southbound shipments are moved in-bond (with shipment documentation handled at the final destination) to minimise Mexico customs clearance delays, said BNSF.

"Mexico is the United States’ third largest trading partner with a yearly trade of just over $500 billion,” said Fernando Lopez, Ferromex’s chief marketing officer. “This translates into 14,000 trucks crossing between our borders on a daily basis. We created this intermodal train to serve such a market, delivering not only a consistent and reliable alternative, but a solid competitive advantage for North America as a region."

KCS A-Max train is longest yet
In the second announcement, KCS moved a train made up entirely of A-Max rail cars. Each of the cars is 145ft long (44.2 metres) and just over 20ft high (6.1 metres), and each has a capacity for between 24 and 26 vehicles. It is the first time that KCS or its Mexican affiliate KCSM has run an A-Max-only train of this length, equal to 6,960 feet long (2,121 metres). By comparison conventional equipment is 89 feet long and 19 feet high with capacity for 15 vehicles in tri-level racks and 10 to 12 vehicles in bi-level racks.

KCS’s A-Max rail cars are primarily operated in premium service manifest trains or mixed with other conventional automotive equipment. There are roughly 1,600 A-Max cars in North American rail traffic and KCS owns or leases 363 of these cars in two pools according to the company.

The company refused to comment on any details relating to the volume of vehicles moved or whether it would become a regular service.

A comprehensive set of special reports on Mexico will be included in the next issues of Automotive Logistics and Finished Vehicle Logistics, as well as on our website.