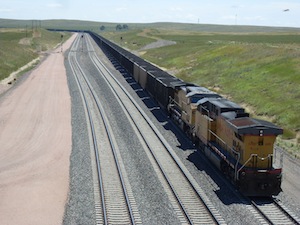 The largest ever decline in coal production recorded in the US in 2015 has hit revenues at several of the North American Class 1 rail companies, with drops in revenue from that commodity of between 30%-40% recorded in the fourth quarter. At the same time, revenues from automotive shipments have remained steady and for certain providers it has been the only sector to show improvement. The contrast begs the question whether rail providers should now rebalance the services they provide to exploit the opportunities offered by existing customers in the automotive sector?

According to the US Energy Information Administration, coal production in the country declined by 109m short tons (11%) in 2015, the largest decline ever recorded. Furthermore, the EIA reported in January that the decline in coal production will continue over the next two years, though at a lower rate of 4% this year and 1% next year.

The impact of the decline is clear when looking at volume and revenue results now being reported by the major railroads in the last quarter and for the full year.

At Union Pacific, revenue from coal in Q4 dropped by 31% to $745m compared with the same quarter in 2014. Across the whole year that meant a 22% drop to $3.2 billion. Coal was the sector that showed the biggest drop for the year. Automotive, meanwhile, was the only sector that showed growth for Union Pacific, though at just 1% in Q4 to $549m, and 2% across the year to $2.1 billion.

Nevertheless, the company recognised strong consumer demand in the last quarter from the automotive sector and the fact that increased vehicle production was driving revenues in the parts movements it handles. Finished vehicle movements make up 58% of its automotive business, while parts account for the outstanding 42%.

The picture was similar at the other providers that have so far released figures and it is not just coal that has been declining. Other energy and industrial products, along with metals, have shown drops, according to category and rail provider. For instance, while Kansas City Southern saw a more modest 14% decline in coal and petroleum coke revenues in Q4, it also saw a 62% decline in Frac Sand revenues across the quarter. At the same time, revenues from the automotive sector went up 10% to $54.7m.

Opportunities in the rebalance
What this shows is that some of the rail providers’ historically stronger segments have been declining and that this could be the norm going forward as commodities rebalance, according to Dennis Manns, chief commercial officer at US rail shipping provider, Road & Rail Services. However, Manns said that this rebalancing could open up opportunities for segments that are showing growth, including automotive.

“The record automotive sales in the US market that were just achieved in 2015 marked a sixth consecutive year of growth,” he noted. “This pace of sales achievement has not been experienced since the 1920s.”

It is something Road and Rail Services has experienced in its automotive handling business according to Manns.

However, whether the automotive sector offers the potential to offset the declines seen in other sectors served by rail depends on two things.

“Every shipper is interested in two key logistic components – service and price,” said Manns. “Shippers are interested in getting their products to market quicker and hopefully at improved rates.  The shift in commodity shipments creates an opportunity for competing Class 1s to possibly become more market sensitive and expand their market share within the automotive segment.”

Manns said that those competing railroads have improved their game in looking at their current customer base to see what expanded opportunities might be available; an easier task than finding new customers, he added.

“From the railroad standpoint, the automotive segment is a great match of product and service,” acknowledged Manns. “Going forward, the key is matching assets and handling the cycle time of these assets.  I am seeing better discussions, better planning and better forecasting than in quite some time.”

Read more about the shift in rail commodity revenues and the potential for the automotive sector in the next edition of Finished Vehicle Logistics magazine (April-June).