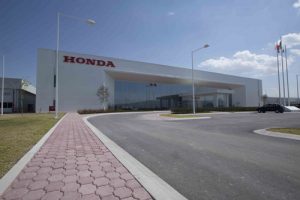 Honda has reported a record year for parts purchasing in North America in 2013, spending in excess of $25.5 billion. It brings the amount the carmaker has purchased in terms of parts and materials in the country to more than $300 billion since it began building vehicles in the region 35 years ago.  Last year it built a record 1.78m vehicles there.

The company also purchased almost $1.26 billion worth of parts from its service parts suppliers in North America last year.

The announcements were made at Honda’s recently held Supplier Conference at which more than 100 parts suppliers were recognised with awards out of its base of 652 North American suppliers. The company honoured 65 OEM suppliers for their performance in three categories: Quality, Delivery and Value. Five companies took the Triple Award for excellence in all three categories: American Leakless, CTS, KTH Shelburne Mfg, Kumi Canada and TS Tech USA.

"With significant growth in our production over the next three years, driven by heavy new model activity in North America, we will continue to collaborate with suppliers to deliver leading edge technologies and the highest quality products," said Tom Lake, vice president of North American Purchasing and Cost Strategy.