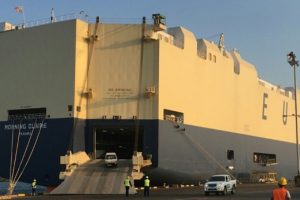 [Updated March 30th] Efforts to refloat the Eukor Car Carriers vessel, Morning Claire, which has been stranded on a sand bar two miles from San Lorenzo port in Honduras since March 18th, have been successful.

The company reported that the pure car and truck carrier (PCTC) berthed at San Lorenzo port at 16.30 local time on March 29th and discharged the cargo due to be unloaded in Honduras. Following a thorough underwater inspection to check for damage, Eukor has also confirmed that the vessel is seaworthy and now continuing to sail on its original schedule to the west coast of South America.

“Her voyage is from Far East Asia to South America via Central America,” said a spokesperson for the company.

The vessel has 4,000 units onboard. As reported earlier, there was no damage to the cargo or leaks found in the ship’s tanks as a result of it running aground on the sand bar, and neither were there any injuries to the 22-strong crew.

Earlier this week inspections were carried out to devise a re-flotation plan.