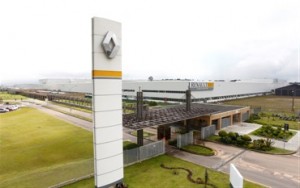 Renault is investing R$240m ($108.5m) to build a national parts distribution centre (PDC) in the city of Quatro Barras, Brazil, with the start of operations planned for the second half of 2015. The new facility will create 250 jobs, and operations will involve the movement of 200 heavy-duty trucks on a monthly basis, according to the company.

The investment follows Renault’s commitment to a R$ 500m investment cycle over the 2014-2019, which will be channeled into the development of two new cars at Renault’s plant in Curitiba.

“Since 2011, Brazil is the brand’s second largest market after France and it is a priority in the Group’s global growth strategy,” said the carmaker’s chairman and CEO Carlos Ghosn. “Renault Brazil successfully completed its previous investment plan and is now pursuing the ambition of expanding its domestic market share.”