Renault to boost output in Iran via new joint venture

Renault has signed an agreement with Iran’s Industrial Development and Renovation Organisation (IDRO) to create a joint venture that will add 150,000 units to the French OEM’s existing annual output capacity of 200,000 in the country. The agreement was signed in the presence of Renault’s CEO and chairman Carlos Ghosn and Mohammad Reza Nematzadeh, Iran’s minister of industry, mine and trade, at the Paris Motor Show last week. 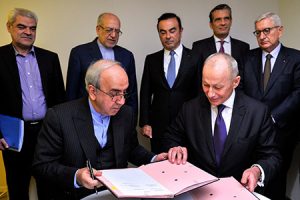 According to Renault, the joint venture, in which it is the majority shareholder, will include an engineering and purchasing centre that will support local suppliers, as well as an assembly plant. The company said it would support local suppliers by pushing for more local purchasing in the production of vehicles in Iran. Production is to begin in 2018 with Symbol and Duster models.

Renault also said it would have its own distribution network complete with sales and aftersales dealers. That network will be new to the Iranian market, according to a spokesperson for Renault.

“The distribution network within this joint venture is brand new in the Iranian market in the sense that it will be dedicated to the Renault brand, selling vehicles produced in Iran,” the spokesperson told Automotive Logistics. “All the services will be under Renault standards. At this stage we are only talking about selling for the Iranian market.”

Renault has been present in Iran since 2003 through its joint ventures with local carmakers Saipa and Iran Khodro. Together the companies have made 500,000 vehicles so far.

According to Renault, vehicles produced with Saipa and Iran Khodro have been sold exclusively through their respective networks. The new joint venture will not share any of the existing dealers.

Since the lifting of international sanctions at the beginning of this year there has been renewed impetus in foreign investment in Iran. Renault is in a good position compared to some other carmakers because unlike them, it did not actually leave the country when the sanctions were imposed in 2012.

“The Iranian government wants to attract foreign investment in the Iranian car industry to bring competitive new products benefitting Iranian customers with respect to standard, quality and safety,” said Mohammad Reza Nematzadeh. “Various options have been considered and because of its continuous presence in the country for more than 12 years, Renault was the ideal partner for this project.”

The Tondar and Sandero are already produced in Iran, while the Clio is soon to be launched. It will be followed by the Captur and the Kwid, according to industry anaIyst IHS Automotive.