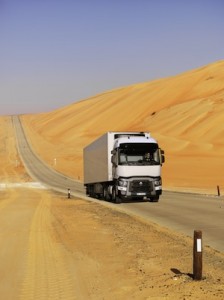 Renault Trucks is extending the distribution of its latest trucks to Africa and the Middle East, including the C, D and K ranges, as it seeks to increase market share in the regions. The vehicles, which are being built at the truckmaker’s plants in Bourg en Bresse and Blainville in France, are being shipped as both finished vehicles and, as is the case for those going to South Africa, as complete knockdown (CKD) kits.

“The overall ambition of Renault Trucks with the development and introduction of these new launches is to increase our footprint in Middle East and Africa,” a spokesperson for the truckmaker told Automotive Logistics. “We are very optimistic about our prospective performance in these markets, and with these launches, we are reaffirming our commitment to these regions, that are growth drivers for us.”

Between 2013 and 2014, the company said it had quadrupled sales of existing models in the Middle East, including Iraq, Iran, Oman, Qatar and Jordan.

In South Africa the company intends to grow its market share from 2% to 5% within the next three years. The truckmaker has a dealer network of 17 outlets there and is currently restructuring and strengthening its footprint elsewhere on the continent, including in Namibia, Botswana, Uganda, Mozambique and Mauritius. In Algeria, Renault Trucks is market leader for the sector.

Explaining the distribution process for South Africa by way of example, the spokesperson for the company outlined that once the trucks were assembled in Renault Truck's Durban plant from the CKD deliveries, it employed logistics provider, Commercial Vehicle Delivery Services (CVDS) for the movement of the trucks within South Africa.

“CDVS specialises in the transportation of new commercial vehicles over 3.5 tons on its own wheels in Southern Africa,” said the spokesperson. “The vehicles are moved from the plant either into storage or to the dealer where they do custom fitments and pre-delivery Inspections. They are then physically driven to the customer at the time of the handover.”

CDVS is also looking at the introduction of a truck carrier to ensure safe delivery according to Renault Trucks.

The move to expand distribution in Africa and the Middle East follows test and adaptations that mean the vehicles can operate under the extreme conditions characteristic of the regions.

“The Renault Trucks K was tested under extreme conditions for more than a year in Oman,” said Lars-Erik Forsbergh, managing director of Renault Trucks in the Middle East. “It is essential for our customers’ businesses to know they can count on their vehicles to improve their productivity.”