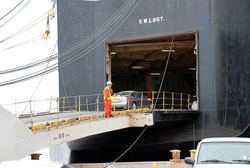 The country’s Competition Commission, which referred the case, is seeking an order obliging the company to pay an administrative penalty equal to 10% of its annual turnover on each of the charges.

The charges stem from a probe into anti-competitive conduct in the market for the transport of motor vehicles, equipment and machinery for import and export from the country.

“From around 2009, MOL and Höegh engaged in prohibited practices in that they agreed and/or engaged in concerted practices as competitors to fix prices, divide markets and tender collusively.”

The work in question include contracts with Daimler, Ford, Renault-Nissan and Maruti Suzuki.

Höegh's General Counsel, Steinar Nyrud said the company was surprised to learn of the Commission's referral via a press release issued this week.

He said the company had last had contact with the authority in the summer of 2015 and had not heard anything since. The investigation had started in 2013.

"I have just received the allegations and so cannot comment on them in any way. We will look into them and argue our case at the tribunal," he added.

Mitsui Lines was granted leniency for its involvement in the cartel conduct in exchange for information and full cooperation in the matter.

Earlier this year, in a separate matter, the Commission referred charges to the tribunal against another ro-ro carrier headquartered in Japan, K Line, for price-fixing, market division and collusive tendering.

Two other shipping companies in the K Line case, NYK and WWL, made admissions and paid administrative penalties of 103.9m rand ($8m) and 95.6m rand respectively.