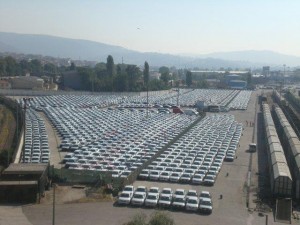 Usage fees for ro-ro operators at Turkey’s busiest vehicle handling port at Derince increased by 450% last month following the privatisation of the port and the beginning of operations under the winners of the contract, Safi Katı Yakıt Sanayi, Ticaret.

Safi won the tender issued last June by the owners of the port, the Turkish State Railways Administration, with a bid of $543m and began operations last month. The company has committed to invest $300m in the construction of new facilities that it said would be operational within five years.

However, despite a stipulation by the Turkish government that operating costs should not be increased for three years, Safi is reported to have imposed new ‘compulsory’ tariffs. According to estimates by the Association of European Vehicle Logistics (ECG), this is equivalent to an extra $10m per year for the four main short-sea shipping operators calling at the port, which include Grimaldi Lines, UECC, Neptune Lines and EML.

Derince port rents storage space to ro-ro carriers and other service providers, which in turn manage their own terminals inside the port.

Shipping group Grimaldi, which calls at the port as part of its short sea Mediterranean rotation, told Automotive Logistics that it would not be able to absorb the costs of operating there and would have to pass the cost onto its customers, including carmakers. The company’s director of commercial logistics and operations, Costantino Baldissara said the company was looking at an increase in costs of around $1.5m per year.

“There is no room for negotiations as the new owner of the port refuses to discuss the matter,” he added.

Baldissara went on to say that Safi was creating problems for the Turkish export industry and pursuing a short-term strategy that could result in carmakers shifting production to avoid the costs.

Those carmakers were reserved in commenting this week, though Toyota, which is one of the main OEMs moving traffic through the port, said it was aware of the situation. Other vehicle makers using the port include Honda, Hyundai and Daimler.

Baldissara’s points were backed up Peter Menzel, commercial director at Neptune Lines, a short-sea operator that also calls at the port. He said that Safi had imposed radical changes to the handling tariffs after unilaterally annulling existing agreements with the several service providers in the port.

“It is clear that these new tariffs will have a dramatic effect on the port users,” said Menzel, adding that shipping lines would not able to absorb such increases and that discussions were under way with relevant parties.

“Neptune Lines has had intense discussions with the new owners and will continue doing so,” said Menzel. “Alternative ports are under discussion and negotiation.

“This is indeed a very challenging situation for carriers as well as shippers and receivers,” he added.

There has been some speculation in the industry that Safi might not be interested in continuing ro-ro business operations at the port, perhaps in favour of developing more profitable container business. However, Menzel said that there had been no clear statement in that direction so far.

So far Safi has not commented or replied to Automotive Logistics regarding its reasons for the increases in fees or its future plans for ro-ro operations at the port.

Should shipping lines or manufacturing choose to divert ports, or should Derince eventually discontinue automotive handling, there are few opportunities to switch to ports with enough capacity. Derince handled more than 500,000 vehicles in 2013, nearly twice the number of vehicles as the next largest ports, Koecaeli, which is operated by Ford Otosan, and Gemport.

Carmakers and shipping lines might make some consolation that the nearby Autoport terminal in Yeniköy recently reopened. However, according to Baldissara at Grimaldi, that port has also sharply increased rates for vehicle handling.