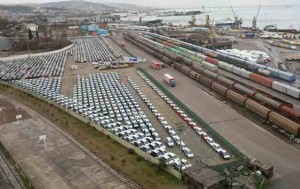 Following the sudden 450% increase in handling fees for finished vehicles at the newly privatised Turkish port of Derince, a significant volume of that business has now been shifted to the adjacent Autoport facility in Yeniköy, which has reopened for business after an 18-month suspension of services.

Shipping lines have also been motivated to move after a recent attempt by Derince’s owner, Safi Derince International Port Management, to force them to sign a backdated waiver on any claims to vehicle damage sustained at the port during loading and unloading.

Safi has offered to reduce SUV handling fees from $50 a unit to $22, the same rate for passenger vehicles, but will not apply the reduction to those operators unwilling to sign the waiver, which is backdated to the beginning of March this year, when it took over the running of the port from the Turkish government.

“Their bargaining tool is to say ‘if you don’t do this we won’t reduce your rate,” said one automotive expert close to the situation. “So this has just caused more bad feeling, and more anti-Derince sentiment.”

As reported in May this year, bad feeling was already engendered when non-negotiable tariffs were suddenly imposed despite an existing pledge by the Turkish government that operating costs would not be increased for three years following the privatisation of Derince. According to estimates by the Association of European Vehicle Logistics (ECG), originally this was equivalent to an extra $10m per year for the four main short-sea shipping operators calling at the port, which include Grimaldi Lines, UECC, Neptune Lines and EML.

The ultimatum regarding damage claims has stoked that bad feeling.

“Basically, the upshot of it is that everyone is moving out as fast as they can,” said Mike Sturgeon, executive director of the ECG.

This was backed up by Bjorn Svenningsen, head of sales and marketing for UECC.

“We have shifted almost all our business out of Derince to other ports in Turkey,” he told Automotive Logistics. “The majority have been shifted to Autoport and some to Borusan in the Gemlik area.  Our strategy is to eliminate Derince from our trading network as soon as possible.”

It is also the case for Grimaldi, according to Costantino Baldissara, commercial, logistics and operations director, who confirmed the shipping line was looking for alternative solutions so it could definitely close operations at Derince. “The 450% cost increase is impossible to absorb, regardless of who is paying for it,” he said.

Other operators are waiting for final agreements with their carmaker customers, who dictate the networks and ports used. Those OEMs are likely to be looking for alternatives as eagerly as their logistics providers, however, as the annual increase in handling fees for the four operators using Derince is something that will translate into higher service charges.

“The OEMs will end up paying the bills because it is their product,” said Sturgeon. “They choose the network, route and ports, and clearly the additional cost is not going to be swallowed by the shipping lines.”

This is certainly true for those OEMs that manufacture in Turkey, who have had their own meetings with Safi Derince to discuss the sudden increase in charges but who have had little success in negotiating any reductions.

“I can only assume they are deliberately driving automotive out of the port,” said Sturgeon. “It is hard to come to any other conclusion, despite the fact that they say they are not.”

Safi Derince has not responded to enquiries into its plans for the port.