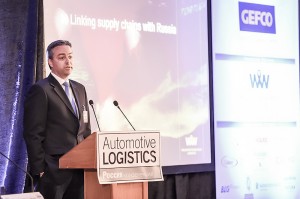 Ocean carriers providing services for vehicle import and export to Russia have a lot more to think about in the current climate. Global trade routes continue to fragment, there is a growth in intra-regional supply and vessel sizes are increasing as the industry seeks greater efficiencies by moving larger volumes. There is also the looming impact of imminent IMO sulphur emission laws around the North European and North American coasts.

As WWL’s president of the Europe region, Eric Noeklebye (pictured), made clear at this year’s Automotive Logistics Russia conference held in Moscow, the business model for ocean shipments has and will continue to change quite dramatically.

The average life expectancy for a deep-sea car carrier is between 25 and 30 years but a vessel built in 1985 is moving on a far more complex network of trade routes these days. Japan once accounted for 85% of deep sea shipments, with the majority made up exports to North America, according to Noeklebye. That is down to 30% now and 40% of trade is moving out of and between other Asian markets. Carmakers are manufacturing on all continents and volumes are moving between them. Central and North Africa is one recent example, with manufacturing starting to take off in Nigeria and Morocco.

Noeklebye said the challenge now when investing $100m in a deep sea vessel is planning where it is going to be used for the next 25 years. Lessons learned from China means this is by no means clear. WWL had expected to be exporting around 1m vehicles out of China by now when plans were discussed in 2006, he admitted. As it turned out the industry now exports nearly 1m units from Europe to China instead, while exports out of China remain modest.

That all comes into play when contemplating the complex prospects of moving volumes into Russia. There is a lot of local sourcing from Europe but the fragmentation of supply routes there now mean vehicles are coming from various clusters in eastern Europe, Germany, the UK, Sweden and Spain to name a few, and that is something that is going to increase.

“Looking at the next five years, in 2014 there are 430,000 units from European manufacturing locations going into Russia,” said Noeklebye. “By 2018 we expect this to grow to nearly 600,000 light vehicles moving into this market.”

This is also largely one-way traffic, he added.

Such imbalance is also a concern for short sea operators, such as Finnlines, which operates almost exclusively around the northern coast of Europe. Blasco Majorano, Finnlines’ traffic manager, North Sea and Biscay, noted the imbalance in trade to Russia which made offering regular services difficult. Nevertheless, he said the company was focused on developing business there and that it was trying to enlarge the number of ports it visited and expand its presence on the market.

“It is a key point to be efficient in the operation and avoid waste, which impacts the service,” said Majorano. “We are investing in vessels that are more flexible and not focused on one market.”

Short sea providers offer a useful service to deep sea carriers like WWL. It is inefficient for larger vessels, such as the post Panamax vessels now coming into service, to make as many individual port calls around the Black Sea and Baltic ports of entry as the short sea operators do. Noeklebye envisaged a move to a more of a hub and spoke set up, with WWL relying on short sea operators such as UECC to handle onward regional delivery. That said, those regional providers are also now investing in larger vessels to make their own efficiency gains as costs increase.

Scrub it until it’s green
One of the influences moving them in that direction is the cost associated with investing in the fuel and technology to meet new sulphur emissions laws that are coming into force at the beginning of next year around the coast of northern Europe. The MARPOL rules coming into effect for 2015 restrict the sulphur content of bunker fuel to 0.1% in the Baltic and North Seas and the English Channel.

WWL is looking at number of options, including liquefied natural gas (LNG) and abatement technology (scrubbers). But it is also looking upstream to solutions that the refineries themselves could offer. The company has a bold roadmap to have a completely emission free fleet by 2040 said Noeklebye.

Finnlines is committed to the use of scrubber technology and Majorano said the company would have the technology on all its vessels next year.

“Next year will be a challenge but we are confident that the scrubber technology is the way to improve,” he said. He added that the drive for efficiency was also down to intermediate steps to reduce fuel consumption such as the reblading of vessel propulsion systems, which it was also doing.

UECC, meanwhile, has ordered two pure car and truck carriers to add to its 23-vessel fleet that are capable of being powered by both liquefied natural gas (LNG) along with heavy fuel or marine gas oil, according to Björn Svenningsen, head of sales and marketing. The contract for the dual fuel new builds has been signed with Kawasaki Heavy Industries (KHI) for delivery in the second half of 2016. They have been jointly developed with KHI, UECC, Wallenius Marine and NYK Technical Group.