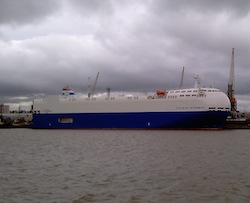 Last week logistics provider Russian Transport Lines (RTL) received its 1,000th ro-ro vessel at its terminal in the Sea Fishing Port of St Petersburg. The M/V City of St Petersburg, which is operated by Euro Marine Logistics (EML), joint-owned by Mitsui OSK Lines and Höegh, delivered more than 1,500 Nissan vehicles collected from the port of Tyne in the UK and the port of Amsterdam in Holland.

RTL opened the vehicle terminal at the Sea Fishing Port of St Petersburg in 2006 and has processed almost 700,000 units since then according to the company. It receives around 150 car-carrying vessels per year. The company provides services including transloading, temporary storage, customs clearance and onward delivery services by truck to the final consignee. The Nissan shipment was moved to around 30 separate locations in Russia.

In 2011 it established a second vehicle-handling terminal at the Commercial Sea Port of Ust-Luga, also located near St Petersburg. The Novaya Gavan terminal is located 14km to the north of the main port at Vistino but is incorporated into Ust-Luga as a separate cargo area.

“The history of RTL is unique as before we commenced handling automobile ferries we never had either stevedoring or ferry business,” said Konstantin Skovoroda, chairman of RTL. “In other words we arranged the work of Russia’s first specialized terminal in Saint-Petersburg and built our own ro-ro terminal in Ust-Luga starting with a blank slate and focusing primarily on expectations of our customers.”