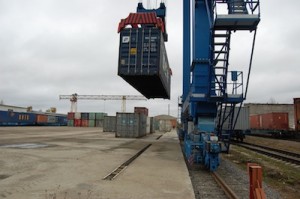 Ruscon, the multimodal subsidiary of Russia’s Global Container Service (GCS), has launched a weekly block train service between Moscow and Khabarovsk in the Far East region of the country.

The train, which has a capacity for 154 TEUs, will depart from the GCS-owned MANP inland terminal, south-west of Moscow, at midday every Saturday, arriving in Khabarovsk, which is near the border with China, on Tuesday afternoon. The train will then return with cargo imported through the country’s Far East ports.

“Our customers in the Moscow region can now be certain that their goods will depart as scheduled on a regular and reliable service to the Russian Far East,” said Marina Gusarova, director Intermodal at Ruscon. “The weekly provision of the Ruscon flat-car wagons on the Pacific coast means that we also have the equipment ready to transport import cargo arriving at the Russian Pacific ports of Vostochniy and Vladivostok to Moscow, and other key destinations in the European part of the country.”

A spokesperson for the company said that currently the service was focused on spot shipments of mixed cargo, with the main level of freight travelling eastbound. However, they went on to say that services for automotive parts from Vladivostok and Vostochniy were on the drawing board, adding that such freight would necessitate a dedicated service.

“We are clear that by serving such flows we would need to offer a dedicated shuttle, as it works with our CKD projects via St Petersburg and Novorossiysk,” said the spokesperson. “Our train to Khabarovsk is more for public that dedicated product but once we fix with automotive customers via Vostochniy, most definitely it will deserve a separate dedicated train.”

GCS expanded CKD services via Novorossiysk in August last year and the following November launched a weekly rail service with forwarder and customs broker Avelana Logistics, connecting the Moscow MANP terminal with the port of Ust-Luga, near St Petersburg, on Russia’s Baltic coast.

In a statement Ruscon said that it plans to launch rail services from Moscow to other destinations in the Far East region to provide a sustainable connection between Central Russia and its remotest Eastern part.

A number of rail providers are looking to develop services across Russia for automotive customers. Gefco is banking on growing its import and export business to China with railway services between Russia, Central Asia and Europe, a service that has been specifically requested by the company’s 75% shareholder, RZD Russian Railways.

While Gefco intends to offer a regular, block train service on the route, the company has only run spot services so far. However, there is growing interest from Chinese carmakers in moving vehicles and CKD kits to Russia and Kazakhstan, according to Gefco China’s managing director, Andrea Ambrogio (read more here).

DB Schenker is also developing services between Europe and China via Russian rail routes. It has operated trains from Germany to China via the so-called Eurasian Land Bridge since September 2011 and moves parts for BMW from Leipzig in Germany to its car plant in Shenyang, China.