Russia conference: Crisis is a time for reinvention 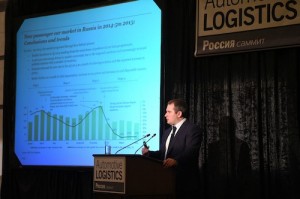 The uncertainty plaguing the Russian automotive market is not going away anytime soon, and a full rebound to the confident performance last seen in 2012 is not likely until 2020 according to Sergey Litvinenko, director of Automotive Advisory Services at analyst firm PwC Automotive Practice.

Opening discussions at last week’s Automotive Logistics Russia summit in Moscow, Litvinenko outlined that one of the main factors shaping the car market in Russia in 2015 was the significant weakening of the Russian rouble, which, by the end of last year had depreciated against the dollar by 99%. This meant that car prices rocketed in the first quarter of this year, hitting sales in an already difficult market as carmakers struggled to minimise losses and at the same time maintain demand. To take two examples from the US and Europe, prices for an Opel increased by 56% between September 2014 and January this year, while the price of a Volkswagen increased by 24% (though these prices have fluctuated in the first half of the year).

The depreciation of the rouble has led to further developments in the localisation of vehicle production in Russia, with a number of key factors for carmakers to consider, including market capacity and export potential. What it has also meant though is that those carmakers with relatively low sales compared to their global average have either cutback output in Russia or stopped it altogether. To take the same two carmakers as examples, Opel’s owner GM stopped production at its St Petersburg plant in March, and at the Gaz plant in Nizhny Novgorod, and said it would end sales of Opel vehicles in the country by the end of this year, along with the majority of Chevrolet models. Gaz is now in talks with at least six foreign car producers in an attempt to get production going again at the Nizhny Novgorad plant. Meanwhile, VW has cut production significantly at its plant in Kaluga.

Sales of foreign car models made in Russia are forecast to drop by 33% this year according to PwC figures, while an optimistic forecast by the analyst suggests that Russian made cars will fall by 10%. Imported vehicles will drop by 55%, meaning that the overall market will see a drop in sales more than 35% to 1.25m, which amounted to a 1.5m fewer vehicles being sold.

However, while the rebound will take some time, PwC has made two projections that show a baseline projection of recovery to 2.8m sales (as in 2012) by 2020 and a best case scenario that shows sales hitting 3m by that year. By 2024 the number of cars per 1,000 people is projected to increase to between 350-400 according to Litvinenko.

"Given the 2.9m vehicles sold in 2012 and the average five-year period of ownership there is potential for the automotive market to grow once the economy improves," he said "We don’t expect anything dramatic next year but the delayed demand for 2017/18 will make it a great recovery."

What OEMs and logistics providers need to do in the meantime is focus on building in better optimisation of supply chain logistics to meet the demands of that eventual recovery.

“Crisis is the time for reflection and reinvention,” said Alexey Kostenko, supply chain design and logistics services, Magna International. “Not only for service providers but for manufacturers as well. Success is about partnership and we are not just talking survival we are talking about moving the industry forward”.

For Ford Sollers – a carmaker that has very much stayed put in Russia during the crisis – successful partnerships for the future depend on reliability.

“We won’t be looking for risk, we want long term reliable partners and will pay a price for that,” said Roger Rogers, executive director, MP&L, at the company. “We want people on the same page.”