Russia conference: Toyota improves quality in a time of crisis 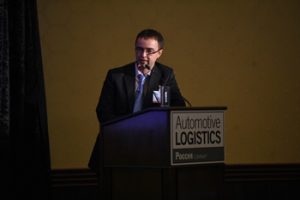 Toyota is not alone in seeing its vehicle sales in Russia at a low ebb, but for Alexey Kokotkin (pictured), manager of vehicle logistics at Toyota Motor Russia, the time is ripe for making quality improvements in its outbound logistics processes.

Sales have dropped from 2.49m units in 2014 to 1.5m and even an optimistic forecast only puts sales next year at 1.9m (1.6m is the less optimistic figure). However, for Kokotkin, who was speaking at the Automotive Logistics Russia conference in Moscow, this is a good time to improve performance.

“Despite the bad performance in the market now, it is a good time for logistics planning and an involvement future logistics projects,” said Kokotkin.

There are already signs of the improvement Kokotkin is looking for. Total losses are down from 24 vehicles to five in the first five months of this year. Kokotkin also outlined a range of measures the company is now undertaking to ensure that drop in damage rates continues when the market recovers over the next five to six years.

One thing it has done is change a number of its logistics providers and is in the process of looking for new ones according to Kokotkin.

“Last year we had five trucking companies and three railway partners, as well as five hub managers,” said Kokotkin. “Over the selection we have made since then the structure has been changed. Now we have two new partners for trucking and one haulaway was excluded, along with one hub company.”

Kokotkin added that the process is on-going and that for 2016 Toyota was open for new logistics partner contracts across the modes. But those prospective partners needed to understand the three things that the carmaker was looking for: transparency, reliability and a competitive tariff.

Toyota is also paying closer attention staff employed as drivers or terminal operatives, with an enhanced training programme in place and an emphasis on motivation, both in terms of reward and penalty. Referring to terminal storage operations Kokotkin said that the company was aware that a lot of damage can happen to the finish of new vehicles because of dress code violations by staff, which it is stamping down on.

Toyota is looking at its truck fleet, with systematic renewal of equipment, regular technical maintenance and quality checks before and after hauls. It is also fitting anti-gravel screens and monitoring speed limits with telematics. This is important given the proportion trucking makes up of its modal options.  Though it is now looking to increase rail as a mode.

Currently the carmaker imports vehicles through the port of St Petersburg by truck to its dealer network in the north west of the country and uses rail to the Urals region and onward to Siberia. It also imports volumes through Novorissiysk by truck and from Vladivostok for distribution to dealers in the south and Far East regions respectively. Given Russia’s ongoing problems with infrastructure, attention to all aspects finished vehicle delivery by truck is crucial says Kokotkin.

TMR is also making regular audits of its dealers, terminal operators and third party logistics providers, and imposing revisions of procedure based on the results.

The company also reports an improvement in delivery times, with backlogs having been reduced from 15.7% last year down to 2.4% in the first five months of this year.

For Toyota the next challenge will be on multi-shift loading at the storage terminal points of pick up for onward delivery.

“Last year we had no standard for arrival [of trucks] within the day. They could arrive day or night. Now it has been standardised with two daily specified slots within three hours on two time slots or loading shifts. Providers now have to follow this procedure and have a standard loading duration of two hours.“

Click here for a full report from Automotive Logistics Russia

Click here to view video recordings from the conference