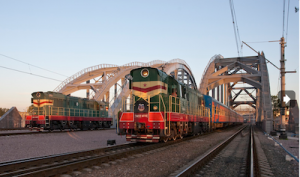 Russian Railways (RZD) is building a logistics complex in Nizhny Novgorod that will include a car terminal for use by its transport and logistics subsidiary Gefco. Completion of the terminal and logistics centre, which is being built by RZD’s construction subsidiary RZDstroy, is expected by August this year.

Sited at Doskino station’s freight yard, the terminal will cover 14 hectares and provide parking for 5,000 vehicles. It will operate as a transport hub for VW and Skoda vehicles produced at the Gaz plant in Nizhny Novgorod as part of the contract manufacturing joint venture VW set up with the Russian carmaker at the end of 2012.

The plant currently produces the VW Jetta and Skoda Octavia and Yeti models.

As well as the parking lot, RZD is building loading and unloading areas, a technical centre and administrative buildings. It will also feature a car dealership for the sale of VW and Skoda vehicles produced at the Gaz plant.

According to Russian Railways, plans for the development of the freight yard at Doskino have been in the works for several years and, in April 2012, plans for a terminal and logistics complex were approved by RZD’s management board. These plans were updated in August last year and the company is developing the site into a major transport and logistics hub linking other parts of the area’s infrastructure, including the railway, the airport at Strigino and the Nizhny Novgorod river port.

“Most of the design work has been completed,” stated a spokesperson for RZD. “Despite the snow conditions in Doskino, preparatory work is already underway. The completion date is August 1, 2014.”