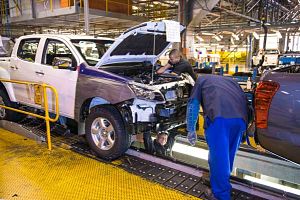 The announcement of a review of government incentives within the South African finance ministry’s recent mid-term budget statement is “nothing extraordinary”, according to the country’s automobile manufacturing body.

A section of the budget statement released on Wednesday October 26th said: “Given increased pressures on the fiscus, these incentives, including direct transfers, tax and tariff rebates and concessional financing, are being reviewed.

“The review is intended to assess performance, determine value for money, and analyse how the system as a whole supports the economy and job creation.”

It is expected to be completed by October 2017.

The statement specifically named the automotive sector amongst others, pointing out that the Automotive Production and Development Programme (APDP) had contributed to increased exports.

Nico Vermeulen, a director of the National Association of Automobile Manufacturers of South Africa (Naamsa), told Automotive Logistics: “Naamsa does not believe there is any intention to reduce current incentives for vehicle manufacturers.

“On the contrary, the Department of Trade and Industry has confirmed its commitment to support the SA automotive industry in expanding its global footprint to levels approximating 1% of global new vehicle production from the 2015 level of 0.68% of global vehicle output.”

The APDP replaced the Motor Industry Development Programme (MIDP) in January 2013 and was well received at the time. Its four main components are stable import tariffs, a local assembly import allowance, production incentives and investment grants.

Vermeulen pointed out that the National Treasury periodically undertakes reviews to determine whether the incentives provided are consistent with official performance expectations and targets for different sectors.

The South African automotive industry remains one of the better performing sectors in the economy, having grown its contribution to gross domestic product by almost 145% over the past decade to 7.2%.

The South African Department of Trade and Industry (DTi) is currently in consultation with industry stakeholders including vehicle manufacturers, importers and distributors, the component manufacturing industry and the trade unions on its 2020-2035 automotive developmental policy framework. It is specifically intended to provide the industry with certainty and stability, according to Vermeulen.

Recently, Volkswagen South Africa MD Thomas Schäfer warned that motor manufacturers would leave South Africa if the government reduced the current incentive scheme while moving to penalise them for a lack of black equity holders and suppliers.

Vermeulen did not respond directly to that but did say: “It is the view of Naamsa that Black Economic Empowerment/transformation is both a moral and economic imperative and we do know that each individual automotive company is pursuing substantial and ambitious transformation plans and initiatives.”