Scania and Northvolt partner on electrification 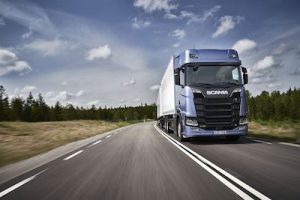 Truck and bus manufacturer Scania and battery technology developer Northvolt have agreed to work together to make batteries for heavy commercial vehicles.

Scania is investing €10 m ($12.4m) to help Northvolt establish a demonstration line and research centre at Vaästerås, in Sweden. The companies will also form a joint team to further development work and related commercialisation.

“We are convinced that we can produce cost-efficient and green battery cells of the highest quality for the heavy commercial vehicle market,” said Peter Carlsson, Northvolt’s co-founder and CEO.

The company plans to build a factory in Skellefteå, north Sweden, to produce 32GWh a year of ‘green battery’ capacity with minimal carbon footprint and the highest ambitions for recycling.

Though vehicle electrification is advancing, Scania pointed out some of the challenges involved in making electric-driven heavy trucks and buses an everyday reality.

Scania president and CEO, Henrik Henriksson, added: “The current battery cell technology must be developed to fulfil the business requirements of heavy bus and truck customers. With Northvolt as a partner, we believe that we can make major strides forward.”

A Scania spokeswoman told Automotive Logistics it would be a while before battery production began, because construction of Northvolt’s new factory at Skellefteå had yet to start.