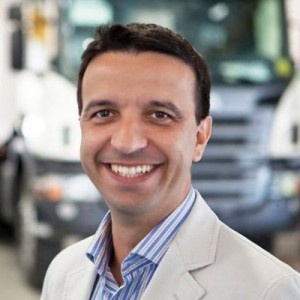 Fábio Castello has moved from his role as head of logistics at Scania’s Latin America division to take up a newly created role at the truck maker as vice president of logistics in the region.

In his new position Castello adds responsibility for complete and semi-knockdown (CKD/SKD) kit operations to his remit. He is now handling the integration of supply chain processes, including order allocation from the dealer network, as well as planning and inbound transport up to the delivery of products, both finished vehicles and kits, to markets in Latin America, Middle East, Asia, and Oceania. All of these markets are supplied by Scania’s São Bernardo do Campo plant, in Brazil, which is now exporting more than 50% of its output compared to 15% just two years ago; a significant part of these exports are in CKD form according to the company.

According to Scania the creation of the vice-president position for logistics is part of the company’s strategy to increase focus on the order-to-delivery process.

"Better knowing the needs of our customers, we have more accurate planning, thus making it possible to [achieve] a more efficient use our logistics infrastructure and increase the synergy between inbound and outbound flows,” said Castello.

Castello has worked for Scania for more than 20 years across a number of departments, including purchasing, planning and logistics, and has been located in Latin America, Middle East and at Scania’s headquarters in Sweden. Prior to his role as head of logistics at the company he was export manager for Latin America.