Scania vows to appeal against EC's €880m fine for price-fixing 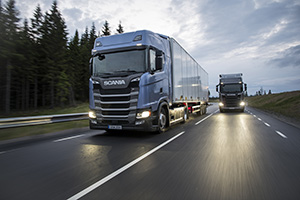 Volkswagen-owned commercial vehicle manufacturer Scania has said it will appeal against a European Commission fine of just over €880m ($1.04 billion) for its role in an alleged truckmaking cartel that is said to have lasted 14 years.

In late September, the EC said its long-running investigation had found that Scania had broken EU antitrust rules, colluding with five other truck manufacturers over the period from 1997 to 2011 on truck pricing and on passing on the costs of new technologies required for stricter truck emission rules.

Announcing the news, EC commissioner for competition Margrethe Vestager said: “Today's decision marks the end of our investigation into a very long-lasting cartel. This cartel affected very substantial numbers of road hauliers in Europe, since Scania and the other truck manufacturers in the cartel produce more than 9 out of every 10 medium and heavy trucks sold in Europe. These trucks account for around three quarters of inland transport of goods in Europe and play a vital role in the European economy. Instead of colluding on pricing, the truck manufacturers should have been competing against each other – also on environmental improvements."

The other five truckmakers involved in the investigation – MAN, DAF, Daimler, Iveco and Volvo/Renault – all reached settlement with the EC over the matter in July last year. MAN avoided a fine as the whistleblower but the other four manufacturers were fined a total of almost €3 billion. Scania declined to reach a settlement with the EC at the time.

According to the EC, those involved in the cartel organised themselves during meetings and phone calls at senior manager level between 1997 and 2004; as well as via electronic exchanges conducted by their German subsidiaries from 2004 onwards. Their discussions are said to have centred around their respective ‘gross list’ price increases, the timing for the introdution of new emissions technologies, and the passing-on to customers of the costs for those emissions technologies.

In a statement following the latest EC ruling, Scania said: “Scania strongly contests all the findings and allegations made by the European Commision and will appeal against the decision in its entirety.” It added that it had co-operated fully with the investigation.

A spokeswoman for the Swedish truckmaker declined to explain the basis on which Scania would be appealing, however, or to say to whom it would appeal and how soon. Autmotive Logistics understands that any appeal would have to be made within just over two months of the ruling to the EU’s General Court.

A spokeswoman for the EC said it would defend its decision in court.

The EC’s ruling effectively paves the way for truck operators to bring claims for compensation to courts in their individual member states.

Earlier this year, UK trade body the Road Haulage Assocation began a group claim in London to seek compensation from the major truckmakers involved. It has suggested it has almost 2,000 truck operators signed up to the claim.

The association has also indicated that the amount of compensation per new truck is likely to exceed £6,000 ($7,950), including interest. That figure does not take into account potential compensation relating to increased fuel costs arising from truck manufacturers deciding collectively to delay the introduction of more fuel-efficient emissions technologies, it has pointed out.