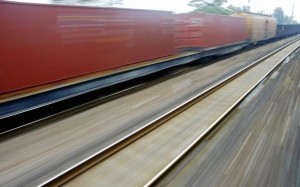 Volvo has signed a long-term agreement with rail freight forwarder Scandinavian Logistics Partners (Scanlog) for the carriage of parts between Sweden and its Volvo Truck factory in Ghent, Belgium.

Scanlog collects goods by truck from producers in Spain, France, Benelux and western Germany, and tranships them at Ghent to the rail service that runs between there and Sweden, called the Scandinavian Rail Shuttle.

“Thanks to the agreement with Volvo we can quadruple the number of departures and reduce lead times in our multimodal Scandinavian Rail Shuttle from the Continent to Sweden,” said Martin Ytander, head of rail freight solutions at Scanlog. “With daily departures on weekdays to our terminals in Sweden we now offer lead times comparable with direct road transportation, but with far less environmental impact and higher cost-effectiveness.”

The rail shuttle service handles up to 7,000 trailer movements a year, offering substantial emissions reductions as part of the multimodal service.

The new agreement with Volvo means Scanlog will also be opening a crossdock terminal in Älmhult in southern Sweden to complement the one it has in Hallsberg for distribution to central and north regions of the country.

Scanlog is the only independent rail freight forwarder in Scandinavia.