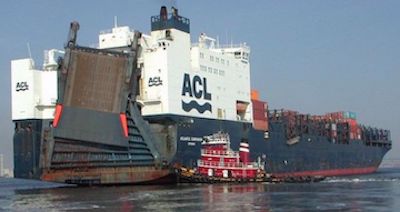 Port and logistics services company SCH has signed a contract with Ford to discharge vehicles arriving at the port of Liverpool from the US and Europe.

Full details of the contract remain confidential but SCH will unload and park vehicles delivered on shipments to the port twice a week. SCH said it would be taking delivery of around 500 vehicles a week over the two shipments. It is the first time that the company has handled finished vehicle volumes through the port.

The vehicles are delivered to Liverpool by Atlantic Container Line’s con-ro vessels, with predicted volumes of over 25,000 vehicles per annum.

[mpu_ad]SCH will be unloading vehicles, including passenger cars and vans, and storing them in its adjacent compound ready for onward transport to the Ford dealer network in the UK.

SCH Director Ian Morrison commented: “Throughout the group, we handle over 200,000+ ro-ro units a year in addition to port terminal and railhead management activities. This extension of our business to include Ford models arriving in Liverpool further underlines our credentials as a leading UK handler of vehicle cargoes.”

SCH handles more than 200,000 ro-ro units a year, including at the port of Southampton.

A company spokesperson said SCH was optimistic that Ford volumes would grow and it remained keen to expand its portfolio in Liverpool should other opportunities arise.