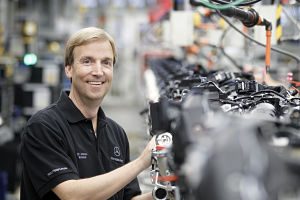 Dr Andreas Schenkel has been named as the first CEO of Mercedes-Benz Manufacturing Poland, as the carmaker confirmed an announcement in May about a €500m investment in an engine plant in the city of Jawor.

The 49-year old graduate mechanical engineer and economist (pictured) has been with the group since joining Daimler-Benz AG as a trainee 20 years ago. He has subsequently held roles including head of rear axle assembly and head of Mercedes-Benz Production System Offices. Most recently, he headed up chassis planning for central production planning at the Untertürkheim plant near Stuttgart.

While production of four-cylinder engines at the plant 70km west of Wrocław is only scheduled to start in 2019, construction is set to begin next year.

“Setting up the first plant of Mercedes-Benz Cars in Poland and managing engine production locally is going to be a very interesting and exciting challenge,” said Schenkel. “I am particularly looking forward to working alongside my team of Polish and German colleagues.”

The proposed plant will only be the second Daimler facility – and the first fully owned entity – producing engines for Mercedes-Benz passenger cars outside of Germany, following the opening of an engine plant in China last year.

The factory will produce four-cylinder engines for Mercedes-Benz passenger cars. It will combine “the latest industry standards with industry 4.0” and be a “benchmark” in engine production, according to the company.

A spokesperson for Daimler told Automotive Logistics the plant would form an important part of the company’s global powertrain production compound.

“As we are in an early stage and starting production in 2019, we can´t provide details on the exact role of the plant in Jawor,” added the spokesperson.

Daimler’s investment in eastern Europe has been on the rise, after the company also announced a €560m expansion of its manufacturing plant in Hungary earlier this year to build a new generation of compact cars by 2018.

The Daimler subsidiary Star Transmission in Romania, which assembles transmissions and produces parts and components, was also recently expanded.

Poland is popularInterest in Poland as an automotive manufacturing location is on the rise.

Speaking at the official signing event in Warsaw this week, deputy prime minster, Mateusz Morawiecki, said the country’s car industry was developing into its “innovation hub”.

“We place particular emphasis on supporting innovative projects which generate added value for our economy and boost its competitiveness,” stated Morawiecki.

A Reuters report based on a later press conference cited Morawiecki claiming that investment from an unnamed automotive industry player from the US had been secured. He was also said to have confirmed that talks with Toyota were also being held.