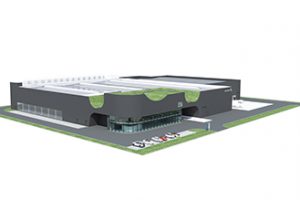 Reusable plastic packaging and container supplier Schoeller Allibert is to begin work on a new Belgian production plant in Beringen, in the province of Limburg, to which it will move from its existing location in Leopoldsburg.

The new factory, which was designed by architectural firm Wastiau & Co, will be a model for all future Schoeller Allibert plants and includes substantial investment in the field of technology, mainly in ‘big product mould’ technology.

The head of Schoeller Allibert’s innovation team, Ludo Gielen, is personally investing in the building, a testament to his “unshaken faith in the future of reusable plastic packaging” and the growth of the company, Schoeller Allibert said in a statement.

“With this technology, Schoeller Allibert brings a lot of innovation and know-how to Limburg,” said Gielen.

“It will include one of the largest machines in the Benelux region, with a shot size of about 45kg,” he continued.

The facility, which will be the company’s twelfth in Europe, will supply the Benelux region, northern France, west Germany and the UK, and focus on larger products including the Big Box Maximus 850L and the plastic ClickPall.

A spokesperson for the company said that while the development programme for the first year did not include automotive related products, it was a possibility beyond as Schoeller Allibert intended to quickly diversify the production line.

Schoeller Allibert is expected to move into the new site next year.

Earlier in June this year the company opened a facility in Zabrze, Poland, for supply to the central eastern European region as well as other parts of western Europe. That plant is using the EuroClick crate designed for the automotive industry.

Read more about the latest developments at Schoeller Allibert.