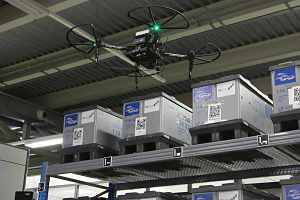 Spanish carmaker Seat held a two-day logistics innovation event last week at its Martorell factory in Spain at which ten suppliers presented the latest in robotic and drone technology for inventory management, handling and delivery to the assembly line.

Seat said the aim of the event was to facilitate direct contact between its logistics operation and suppliers, as well as identifying future projects that applied to its logistics requirements. Among the suppliers at the event were automated guided vehicle (AGV) maker Kivnon and robotics provider PAL Robotics.

A highlight among the advanced technologies being demonstrated this year was the use of autonomous and collaborative robots. This included the use of drones for the stock-taking of containers (pictured) and predictive simulation software that enabled decision-making about future situations to improve logistics flows.

“Logistics is at the core of customer service,” said Seat’s vice-president for production, Dr Andreas Tostmann, who emphasised that logistics was central to the competitiveness of the industry, both in terms of more efficient production and delivery to the dealers. “We want to streamline the manufacturing process and vehicle delivery, and in this sense, logistics plays a key role. These sessions demonstrate that we continue to be committed to innovating.”

In the last five years, Seat has allocated €3 billion ($3.2 billion) of investment for research and development, equipment and facilities.

Find out more about the role of logistics in Seat’s inbound production and aftermarket from Enric Martí, logistics director at the carmaker, and Dr Ulrich Lutz, Seat’s director of aftersales.