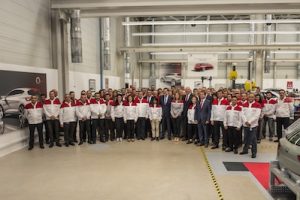 Spanish carmaker, Seat, has announced a €3.3 billion ($3.6 billion) investment plan for the development of new products that will run between now and 2019.

The spending will be directed toward equipment and facilities, along with research and design projects at Seat’s technical centre in Martorell. It is the largest spending project for new models in the company’s history and will result in the launch of four new vehicles over the next two years, said Seat.

“[T]he €3.3 billion is earmarked for promoting new vehicle development R&D projects at the Seat Technical Centre, as well as equipment and facilities in the Martorell factory,” said Seat’s executive committee president, Jürgen Stackmann during an event to mark the 40th anniversary of the Seat’s Technical Centre. The event was also attended by Spanish Prime Minister Mariano Rajoy, along with Dr Francisco Javier García Sanz, member of the board of management of Volkswagen.

Seat said the spending plan would have a positive impact on the components industry, as it would significantly increase the supply of parts manufactured in Spain. This in turn will bring benefits to those logistics providers handling their delivery.
Seat’s latest spending announcement follow the €1.4 billion it has spent on R&D in the last five years.