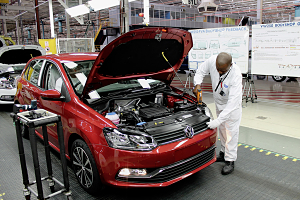 Exports from South Africa to the rest of Africa continued their downward trend in 2016, almost halving in number, according to the latest quarterly update from the National Association of Automobile Manufacturers of South Africa (Naamsa).

Back in 2014, other African countries were together the second largest export destination behind Europe for South Africa; they are now the second smallest – just ahead of South America.

Naamsa says the drop in exports was due to a number of factors, including ad hoc duty increases in countries like Nigeria and Zimbabwe, regulatory restrictions in Algeria and continued weak economic conditions in most African states.

This trend was also evident in South Africa itself, where new vehicle sales declined by 11.4% in 2016 compared to 2015.

The association’s forecast is for a new record of 358,000 passenger vehicles to be produced in 2017. Almost 30% of these cars are destined for the local market. LCV production is expected to reach 253,000, meanwhile.

The Naamsa update also showed aggregate industry employment levels declined by 1,900 jobs to 29,489 positions by the end of December.

Capacity utilisation levels showed year-on-year reductions in the car, light and medium commercial vehicle manufacturing sectors, while there was an improvement in the heavy truck sector.

Total capital expenditure in the South African automotive sector is estimated to have totalled R6.42 billion ($465m) in 2016 and is forecast to increase to R8.17 billion during 2017.