Shipowners should be immune from fuel penalties, says Grimaldi 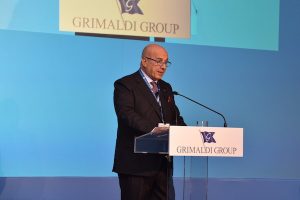 Emanuele Grimaldi, the managing director of Italian shipping firm Grimaldi Group (pictured), has called for immunity from penalties for shipowners who find themselves in circumstances where it is impossible to comply with the forthcoming rules on maritime sulphur emissions.

At the beginning of 2020 it will be compulsory under regulations administered by the International Maritime Organisations (IMO) for ships to use fuel oil with a sulphur content no higher than 0.50% m/m. The current global limit for sulphur content of ships’ fuel oil is 3.50% m/m. However, it is the global availability of the less sulphurous fuel that is causing concern for Grimaldi and shipowners like it.

Speaking at this year’s Euro-Med convention, held in the Greek capital Athens last week (October 5), Grimaldi said the availability of the fuel was a question for the suppliers and distributors of the fuel oil, and not the shipowners.

“If you arrive in Australia and you ask for 0.5% fuel and there isn’t any, what are you going to do? Stop the vessel there and say you will wait until they find the fuel?” asked Grimaldi.

He acknowledged that the prevailing majority of shipowners around the world were ready to deal with the requirements of the regulation but wanted reassurance that in the instance of a supply problem in which it was impossible for them to comply they would be able to continue on schedule and granted immunity from prosecution.

Under the rules, port and flag states will apply their own sanctions for contravention of the regulation rather than the IMO.

Grimaldi also noted that it was important that once the regulation was enforced in law it needed to be policed properly to maintain fair competition in the shipping sector.

Betting the bottom dollarOne of the issues for shipowners at the moment is that the cost of the 0.5% fuel is unknown, though it will be more expensive than the fuel currently used.

“All shipowners have been sent to the betting shop, we don’t know the cost of the 0.5% fuel,” said Grimaldi, adding that trying to find that out from the suppliers would be inevitably misleading because of the vested interests those suppliers had in maintaining a supply and demand balance in their favour.

That is nothing to do with cost of production, according to Grimaldi, but more about the demand and supply situation in which prices will be higher in the early days of high demand. However, Grimaldi said that the situation would balance out and in the long term.

“When they supply enough the price will drop,” he said. “The differential will be much smaller in the long term.”

Shipowners also have the option of installing sulphur abatement technology, or scrubbers, on their vessels to remove the sulphur from heavy fuel oil. Grimaldi currently has around 28 vessels fitted with scrubbers, with a further 20 new vessels on order that will also be equipped with the technology. According to Grimaldi that means 35% reduction in the sulphur pollution per vessel.

However, as indicated by Mikael Makinen, president of marine business at Rolls Royce, who was also speaking at the Euro-Med convention, there are currently only about 300 vessels equipped with scrubber technology. The Exhaust Gas Cleaning Systems Association (EGCSA) has reported that at the end of May this year there were more than 980 vessels either equipped with scrubbers or on order. That is still less than 4% of the overall number of ships that are going to be required to conform to the regulations in just over a year.

With that in mind Grimaldi is investing in a range of other technologies, including lithium battery power generated while at sea to enable vessels to stay in port emission free for up to five hours. The company is investing more than $400m in six hybrid ro-ro vessels to enlarge and modernise its fleet. The vessels are being built by Chinese shipbuilder Jinling for delivery in 2020. They are double the capacity of the largest vessels currently operated by the Italian shipping line and triple that of the previous generation of ro-ro ships.

Last year by this Grimaldi took delivery of the Grande Baltimora, the first unit of a series of 10 green giant car carriers for the deep-sea routes, which has since been followed by the Grande Philadelphia and Grande New York.