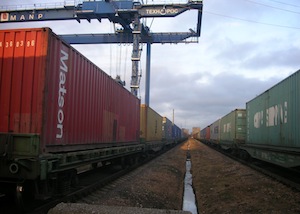 The MANP inland terminal outside Moscow, which is owned by Russian logistics provider Global Container Services, has launched a new weekly rail service with forwarder and customs broker Avelana Logistics, connecting it with the port of Ust-Luga on Russia’s Baltic coast.

“We want to offer shippers with just one or two containers the same advantages as our bigger customers,” said Maxim Tyomkin, CEO of MANP. “The train is particularly attractive for shipments during the winter season, when road haulage is more expensive and risks of delays are high.”

GCS said that the total price of intermodal transport from Ust-Luga to Moscow, using the train to MANP terminal and onward road services, is significantly lower than making the journey exclusively by road. In addition, cargo is not subject to the heavy-weight surcharge, which is usually applicable on road.

According to Tyomkin, the service also offers transfers from the terminal, which is 45km outside Moscow, to final consignees.