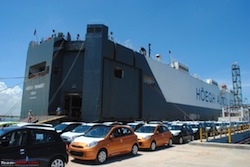 Indian logistics provider Sical Logistics is withdrawing from its joint venture in Ennore Automotive Logistics, which manages vehicle exports at Ennore Port near Chennai, including those for Honda, Nissan and Toyota.

Sical Logistics holds a 40.92% stake in the venture, which also includes Mitsui OSK Lines and was set up in 2009.

In an announcement to the Bombay Stock Exchange the company said that its management board had approved the proposal to divest the company’s entire shareholding in the joint venture.

It did not provide any other details about the divestment.

Ennore port hopes to be handling between 250,000-300,000 units by 2015, which will require it to double its current capacity for vehicle handling. Industry sources say that VW and Daimler India Commercial Vehicles are also exploring the use of the port as an export option.

Ennore’s dedicated ro-ro berth, which was commissioned in January 2012, can accommodate 8,000 cars and has a storage area for up to 10,000 medium-sized vehicles, making it the largest at any Indian port. In the short term, another storage area, for up to 3,000 vehicles, is also planned.